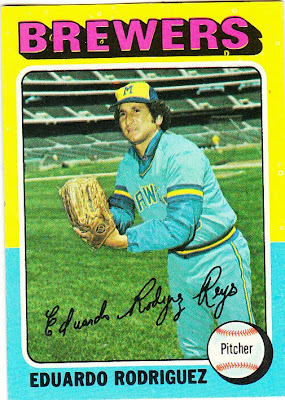 Card fact: One of two players named Rodriguez in the set. The other is Aurelio Rodriguez.

What I think about this card now: Rodriguez looks cold. He's all bundled up.

Other stuff: Rodriguez was primarily a middle relief pitcher for the Brewers between 1973-78. He spent his last season in the majors with the Royals in 1979. He played in his native Puerto Rico after that.

Rodriguez died of a heart attack on his 57th birthday two years ago. 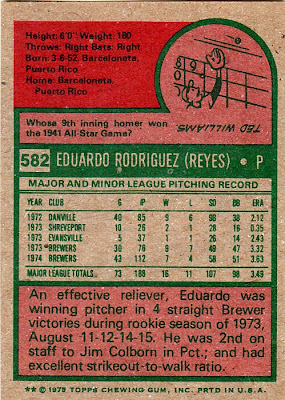 Back facts: Rodriguez was born on the same day as my wife. I'm pretty sure she doesn't know who Eduardo Rodriguez is.

Other blog stuff: I like to mention this every June 29th. On this date in 1990, Dave Stewart of the A's and Fernando Valenzuela of the Dodgers each pitched no-hitters. Only the second time that had happened and the first time since 1917. As a Dodger fan, I was particularly proud because both players came up with the Dodgers.
Posted by night owl at 1:14 AM

I'm pretty impressed with his 4 straight victories in row. I wonder if that's a record. Great trivia/cartoon on the back.