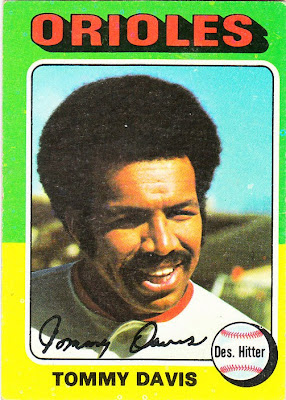 Card fact: There aren't a lot of capless players in this set -- thank goodness -- but Davis is not the first. Two other players have been featured without a cap -- if you don't include the Ralph Garr card, in which his helmet has fallen off his head in the photo.

What I thought about this card then: I had the mini card, and it is one of the first cards I think of when I think of my minis. It almost kind of came to represent the minis. The king of the minis. It's hard to argue with a guy in an Afro on a mini card.

What I think about this card now: I don't know why Davis is pictured without a cap. Many times Topps featured players without a cap because they had been traded recently or Topps believed a player was about to be traded (perhaps rumors of a trade were afoot). But Davis was in the midst of a four-year stay with the Orioles at this point.

Other stuff: Davis was a well-traveled player between 1959-76, competing for 10 teams in his major league career. But he didn't begin to bounce around until after suffering a broken ankle while sliding into second base during a game with the Dodgers in 1965.

Davis had been a two-time N.L. batting champion with standout seasons for the Dodgers in 1962 and 1963. His 153 RBIs in 1962 is still a Dodger record. He possessed both speed and power. But after the injury, his power diminished and he was dealt to the Mets after the 1966 season.

After one quality season with New York, he was shipped to the White Sox and then the Pilots and then the Astros, all within a three-year period. While with Houston, then Oakland, then the Chicago Cubs, he was more of a part-time player. It wasn't until he arrived in Baltimore and became the Orioles' full-time designated hitter, that Davis began to show what he exhibited back in the mid-1960s. He drove in over 80 runs in 1973 and 1974.

Davis finished his career with the Angels and Royals. He later became a coach for the Mariners (he is featured as a coach in the 1982 Donruss set). 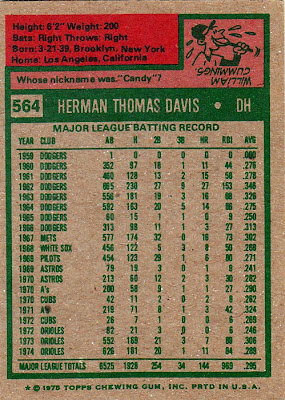 Back facts: I'm not sure, but this might be the most jam-packed card in the set. We'll have to check out Frank Robinson and Hank Aaron before I know for certain. 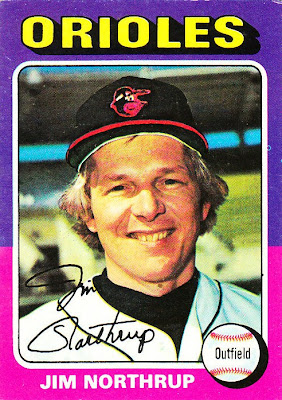 This was the final Topps card of his career.
Posted by night owl at 2:33 AM

I remember being fascinated at the lengthy stats on the back of this card. I then wondered about his other cards featuring the other teams. I remember think that Davis withe the Cubs AND White Sox was so cool and unique. Of course, that was before you could find stats and pictures on line.

Sad news about the Gray Fox. Jose Pagan also died this week; he was 76.

Topps almost didn't have room for a cartoon. He does look happy about all those stats.