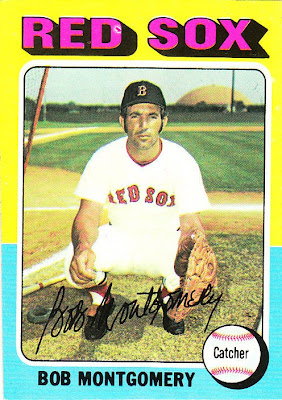 Card fact: It has been 104 cards since the last yellow-light blue bordered card.

What I thought about this card then: I never saw it. But there were later Bob Montgomery cards -- most notably his 1977 Topps card -- that made me think that he was about 62 years old when he was playing. I don't think I ever uttered this thought, but I know it was always there in my subconscious. I would see him on TV during a game and think that the Red Sox's backup for Carlton Fisk was a 62-year-old  man.

What I think about this card now: Check out the dome in the background. I never know what those things are. There was one across the street from a school where I would play tennis when I was in college. It could have been a UFO for all I knew.

Other stuff: Montgomery played his entire 10-year career with the Red Sox and it spanned the entire decade of the '70s. Montgomery was known as Fisk's backup. He didn't hit a lot, but that was not his primary job. Montgomery's biggest claim to fame as a player was that he was the last major leaguer to play in a game without a helmet. Players were required to wear helmets in 1971, but major league baseball let those who were already playing to continue to wear soft caps as long as they were in the majors.

After his playing career, Montgomery broadcast Red Sox game on WSKB-TV in Boston throughout the 1980s and into the '90s. Growing up, I always wanted my local television provider to carry WSKB. 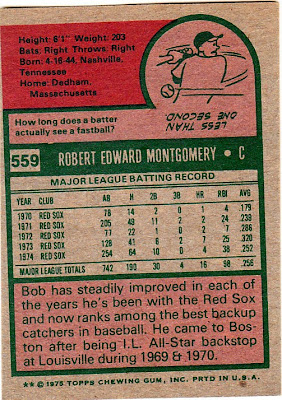 Back facts: Wow, that's a crooked card back.

I never know how to comment on something like "now ranks among the best backup catchers in baseball." Maybe it's a compliment, maybe it isn't. Depends on the player, I guess.

Other blog stuff: On this date in 1964, Sandy Koufax pitched his third no-hitter, a 3-0 victory against the Phillies.
Posted by night owl at 2:20 AM

Montgomery also didn't wear a batting helmet while hitting. I think he was the last to do that. He just didn't like the way a helmet felt. He wore some sort of reinforced cap as I recall. Luckily, he never took one in the ear.

Also, the Sox games were on WSBK, not WSKB.

Thanks. I didn't know I was dyslexic.

Interesting thought on the backup comment. My friends and I started the Backup Catcher Hall of Fame and inducted Montgomery the first year. It is meant as a compliment, but I really wonder what a backup catcher would think of it. It takes a special player to be good enough to be a career backup.

We have those dome things here in Texas. They are water "towers" at some of the water treatment plants in some cities.

I like the catcher "pose", but I wish they actually had some gear on, even if they were backups.