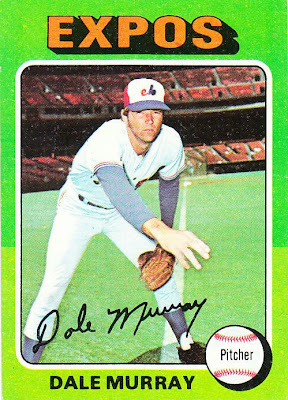 Card fact: With this card, the green-light green border combination ties the orange-brown border combo for the overall lead with 48 cards apiece.

What I thought about this card then: This is one of the cards that I pulled out of the first three packs of baseball cards I ever bought, back in 1975. Everything about the card is ingrained in my brain. When I see it, I'm immediately transported to my bedroom on 6 Chadwick Road.

What I think about this card now: Is that a backstop way off in the distance? Look at how far away Dale Murray is from it! I'm surprised there is any room in front of Murray for a photographer to take a picture.

Other stuff: This is Murray's rookie card. He started off with a bang for the Expos, registering a 1.03 ERA in 32 games as a reliever.

Murray played for Montreal, Cincinnati, the New York Mets, Toronto, the New York Yankees and Texas. He was traded from Montreal to Cincinnati in the trade that sent Tony Perez to the Expos. Later, he went to the Yankees from the Blue Jays in a deal that gained Toronto Fred McGriff, Dave Collins and Mike Morgan. 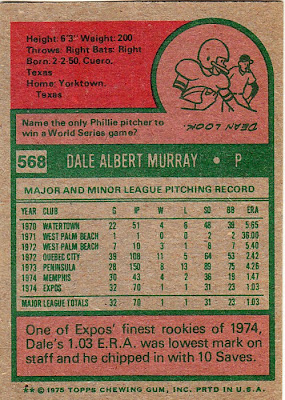 Back fact: I know this cartoon as well as any cartoon in the set. Yet, it isn't until now that I have attempted to look up why there is a picture of a football player with a question about a Phillie winning a World Series game.

It turns out that this is another cartoon mix-up. Dean Look was a baseball player with a three-game career with the White Sox in 1961. He is better known as a collegiate football star and NFL player, who later became a longtime NFL referee.

The only pitcher to win a World Series game for the Phillies as of 1975 was Grover Cleveland Alexander who won Game 1 of the 1915 World Series against the Red Sox.

There are so many things as a kid that you just chalk up to "well, I don't understand that because I'm a kid." It turns out the cartoon would have confused anyone!

Other blog stuff: I still have that card of Murray that I pulled out of those first packs. A rookie card collector pulling a rookie card: 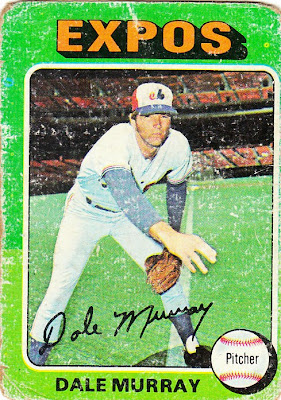 I like the original better. I can see a little Night Owl carrying that card around looking for trade partners. I think that card is one of the great things about this hobby. It transports you back to your childhood, to the very bedroom you grew up in. That's cool.

Also, the green-green combo placing so high surprises me. When I think of 1975 Topps I do not think of green-green. Orange-brown, yes. But green-green?