Card fact: Wilbur Howard has already appeared on this blog once before.

What I thought about this card then: I have the mini card, but I believe it's one of the few that I have acquired after 1975. I don't remember thinking anything about this card as a kid.

What I think about this card now: Howard is airbrushed into an Astros cap. This is his first solo card, but he appeared in the 1974 Topps set on one of the four-player rookie cards and he is wearing a Brewers cap. Howard was traded from the Brewers to the Astros at the end of March 1974.

Other stuff: Howard was mostly a fourth outfielder for the Astros between 1974-78. He played in 121 games in 1975, finishing with 111 hits and ranking in the top 10 in the National League in stolen bases with 32. 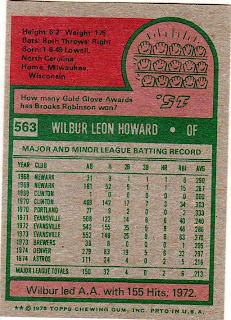 Back facts: I have no idea why the number 15 is printed in giant block letters. It's a departure from the format used for all the other cartoon answers.

Other blog stuff: On this date in 1965, Rick Monday became the first player drafted in the inaugural major league player draft. The Arizona State sophomore was selected by the Kansas City A's.
Posted by night owl at 1:51 AM

That cartoon really jumps out at you. It's more interesting than the front of the card.

I knew Willie when he played for the Newark Co-Pilots, a single-A team in the NYP league. Soft-spoken, gentlemanly, and a delight to have at our home -Hydesville Rd., Newark, NY.