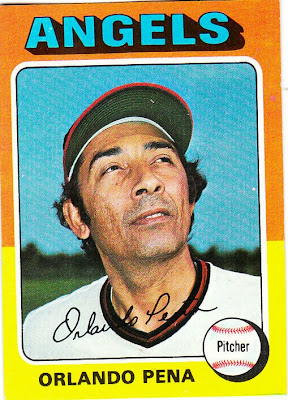 Card fact: This is the final Topps card of Orlando Pena issued during his career.

What I think about this card now: I believe Pena is wearing a Cardinals uniform in this photo as he was traded by the Cardinals to the Angels in September of 1974.

Other stuff: Pena was known as a junk-ball pitcher, but used his variety of pitches to compete in the majors from 1958 to 1975. His first baseball card was in the 1959 Topps set. From that point, his appearance in the major leagues was sporadic. He was used as a reliever with the Reds at the start of his career, but when he went to the Kansas City A's, he became a starter. He lost a league-high 20 games in 1963.

Pena returned to a relief role for the A's and the Tigers, appearing in 50 games a season regularly. But by the late '60s, he was back in the minor leagues. Pena lacks a baseball card from 1969-73 as he bounced between the minors, the Indians, Pirates and Orioles.

He found a spot with the Cardinals in 1974, and enjoyed a renaissance at age 38, appearing in 46 games and registering a 2.21 ERA. He had one more season with the Angels in '75. After his career, he became a scout for the Tigers. Even at age 77, he's still listed as a scout. 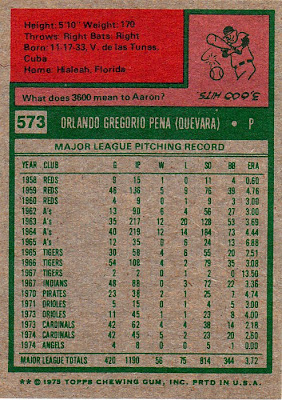 Back facts: Hank Aaron might be on more '75 cartoons than any other player. The phrasing of the question is kind of odd.

Other blog stuff: The blog is taking a breather for a couple of days. It will be back with a new entry soon though.
Posted by night owl at 3:11 AM

These bring back serious memories--the Joe Torre card is awesome...

I know why Topps didn't list his minor league stats, but those gaps in his years played bother me. I had to double check Hank's stats to make sure he had 3600 hits after the '74 season and he did. Still, it is odd phrasing on the question.