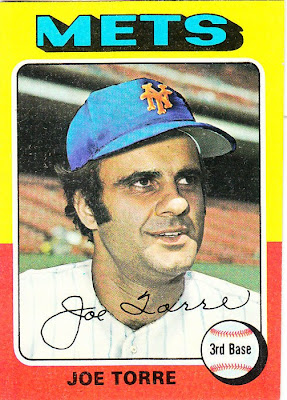 Card fact: I hate to break it to you, but Joe Torre is not really wearing a Mets cap. He is airbrushed into the cap because he was traded from the Cardinals to the Mets on Oct. 13, 1974.

What I thought about this card then: I didn't see it. But I did associate Torre with the Mets for a long, long time, even though he was primarily a Brave and a Cardinal during his playing career.

What I think about this card now: Torre has a great card in the 1971 Topps set. This is the complete opposite of that.

Other stuff: Torre had a very good playing career, but nobody remembers that because he is fifth all-time in wins by a manager. Torre's stint with the Yankees, in which he won four World Series titles and appeared in six World Series overall, erased an overall perception of Torre as a great player, a decent broadcaster, and a mediocre manager. Up until his stay with the Yankees, he enjoyed moderate success managing the Braves and Cardinals, but that was overshadowed by his poor Mets teams of the late 1970s.

Torre came up with the Braves and was a catching all-star throughout the 1960s. He was traded to the Cardinals for Orlando Cepeda before the 1969 season and moved from behind the plate to first base and third. When he set up shop permanently at third base, his batting numbers soared. He enjoyed tremendous seasons in 1970 and 1971 and was named N.L. MVP in 1971.

Torre ended his playing career with three years with the Mets, and was a player-manager in his last season in 1977. His managing career ended 32 years later with the Dodgers. He's now executive president for baseball operations for MLB. 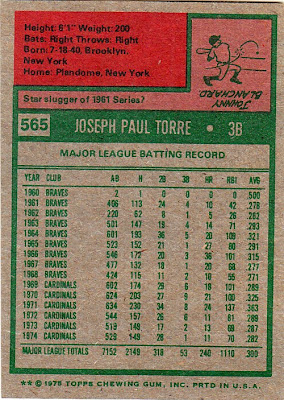 Back facts: Wow, that cartoon is full of information, isn't it? Johnny Blanchard was a part-time player for the Yankees who went 4-for-10 with two home runs in the 1961 World Series against the Reds.

Other blog stuff: On this date in 1944, Joe Nuxhall became the youngest person to ever appear in a major league game, throwing 2/3s of an inning for the Reds at age 15 in an 18-0 loss to the Cardinals.
Posted by night owl at 2:27 AM

That's not even a real question. Well, grammatically speaking it's not. That's two full stat sheets in a row.