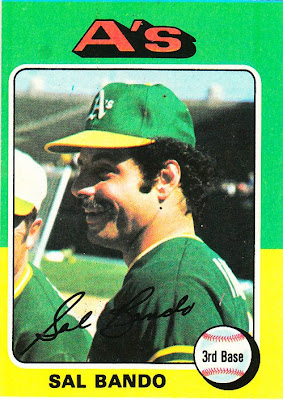 Card fact: This is the third Oakland A's card that has featured a green-and-yellow border. That can't be coincidence, seeing as the A's were the defending World Series champs.

What I thought about this card then: I didn't see a card of Sal Bando until he was a Milwaukee Brewer. I do remember my friend, an Oakland A's fan, talking about him a lot though.

What I think about this card now: Topps cut the poor coach/manager out of the shot!

Other stuff: Bando was one of the key members of the Swingin' A's dynasty in the 1970s, playing third base for them for 11 years, first in Kansas City and then in Oakland. Bando was the captain of those often dysfunctional teams and was known as much for his fielding as his hitting. He never won a gold glove, with Brooks Robinson in the same league as him.

Bando finished second in the MVP voting in 1971 and was in the top five in MVP voting in both 1973 and 1974 (despite hitting just .243 in 1974). As with most of the A's from those teams, he departed as a free agent, signing with Milwaukee in 1976. He had two solid seasons for the Brewers before age and injury caught up with him. The final games of his career were in the American League Division Series against the Yankees in 1981.

Bando later became the general manager for the Brewers (something I totally forgot). He was GM for seven years and was probably most noted for letting Paul Molitor go to the Blue Jays.

Bando's younger brother, Chris, also played in the majors. For the longest time, I thought Chris was Bando's son. 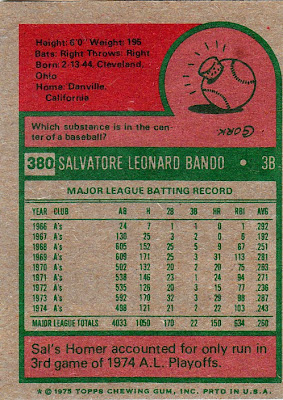 Back facts: Have you ever seen that "How It's Made" show when they featured baseballs? I saw that and also the one where they show how graphite softball bats are made. Always interesting stuff.

Also, I'm taking a break on the blog for a little bit. Everyone enjoy their Thanksgiving.
Posted by night owl at 8:50 AM

I remember going to a game at County Stadium in Milwaukee shortly after Bando was traded to the Brewers. My grandpa's next door neighbor kept screaming "CAPTAIN POP UP" every time Bando came to the plate.

That's a terribe picture, but the color scheme is great. I watch "How it's Made" with my kids all the time. It has some great stuff. Happy Thanksgiving.

Growing up with the great A's teams of the 70's, we were all familiar with Bando's nickname of "Cap'n Sal" because he was the team captain. It was so sad to see all those great players scattered all around baseball the following years. They still don't like to come back for stuff even now because Finley was such an ass. So, the A's don't celebrate their own history like they should.