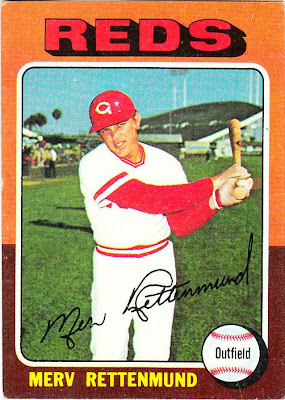 Card fact: People took so much more pride in their penmanship then than they do now. There is no chance, if Merv Rettenmund played now, that you would be able to make out more than the "R" in his last name when he signed an autograph.

I know that's not a fact. It's an observation. I suppose I should have made this category "card observation."

What I thought about this card then: This was one of my favorite cards in the set. I don't know why. I do know it came from a pack that I bought after a summer walk to the drugstore. Those were the best walks. The only destination was to a place where you would purchase cards.

What I think about this card now: It's a strange one. If you squint a little, it appears if that stadium construction in the background is a UFO. And Rettenmund looks a bit wacky with the helmet on his head and that stupid backswing pose that they made players do back in the day. There is no way you're hitting a ball anywhere with a lazy backswing like that.

Other stuff: Rettenmund played 13 years for the Orioles, Reds, Padres and Angels. He started off quickly as a key part of the Orioles' World Series teams between 1969-71. He hit very well in '70 and '71. But his hitting declined to below average year after year until he was a part-time player and reliable pinch-hitter.

Rettenmund then built a second career as a hitting coach for a number of major league teams. He has a rather, um, promotional, web site. 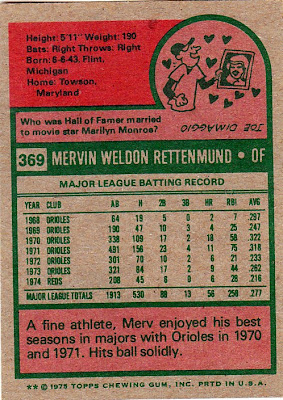 1. The cartoon question forgot the word "the." But drawing Marilyn Monroe could get a little distracting, I guess.

2. Mervin Weldon Rettenmund has to be in the top 10 of best baseball names ever.

3. You should never put on the back of a baseball card that someone is "a fine athlete." If he's playing major league ball, he's "a fine athlete," no matter what John Kruk says. 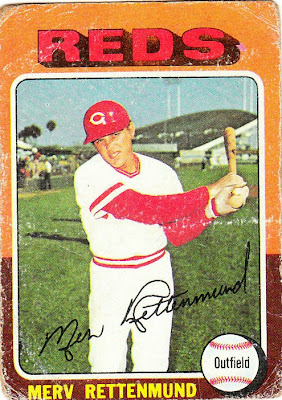 Other blog stuff: That's the original card that I pulled out of that pack at the drug store.
Posted by night owl at 12:51 AM

How great is that to still have THE card you pulled out of a pack 35 years ago? Very cool.

Now, is that a guy standing on the rail in the background? Weird.

This card makes me think of collecting the '75 set with my Dad. I could never get Merv's name right, and it always cracked up my Dad. We'd be sifting through a stack of '75s at a baseball card store or at a show, looking for cards we didin't have yet, and whenenever I found this card I'd ask, "Do we need Merv Rettenberg?" "Who?" my Dad would ask. "You know, Merv Rettenmerver."

It became a running joke with us.

The stadium is Tampa Stadium aka "the big sombero" the future home of the Tampa Bay Bucaneers and possibly at the time home University of Tampa football program (which disbanded in 1974) and Tampa Bay Rowdies soccer team. Adjacent to the stadium was Al Lopez field the Reds training site at the time. *Not to be confused with AL LANG field across the bay in St Pete. A good picture of field before it was inclosed for the NFL.