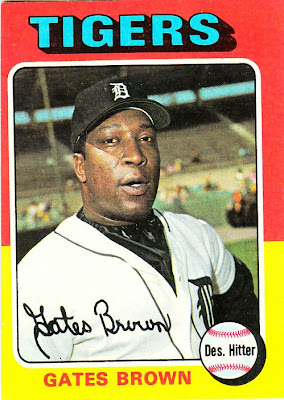 Card fact: This is the last Topps card of Gates Brown issued during his career.

What I thought about this card then: Oh, it was a favorite. Something about the photo, which appears to catch Brown in mid-gab, made me like it a lot. Oddly, I remember trading the card away. But I don't know why.

What I think about this card now: The wind-breaker, or whatever it is, under the uniform still seems strange even though it was very common in the '70s.

Other stuff: Brown is known for a few things. He was one of the best pinch-hitters in baseball history. He had to be, because he wasn't a great fielder due to his roundish stature. He hit a home run in his first major league at-bat, as a pinch-hitter. During the Tigers' World Series championship season in 1968, Brown was called upon to pinch-hit repeatedly and enjoyed great success, hitting .370 in 92 at-bats.

Brown is also known for a famous story in which he ended up having to stuff hot dogs down his jersey when called upon to pinch-hit. Brown wasn't in the starting lineup, so he decided to grab a couple of hot dogs, only to have manager Mayo Smith tell him to pinch-hit. He hid the hot dogs in his uniform and proceeded to hit a gapper for a double. He was forced to slide into second -- head first. When he emerged, he had ketchup, mustard and hot dog bits all over him. Cracked everyone up.

Brown later worked as a hitting coach for the Tigers during the late '70s and early '80s. 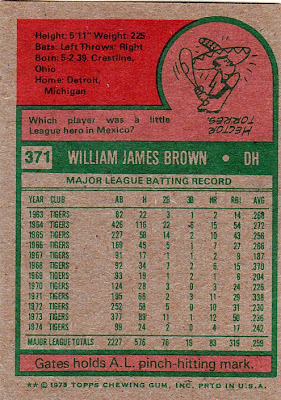 Back facts: Hector Torres was an infielder for a number of teams between 1968-77. But he didn't receive a card in the 1975 Topps set because he didn't play in the majors in '74.

Also, Topps will tell you Gates holds A.L. pinch-hitting mark, but it's not going to tell you which one. Figure it out for yourself, buddy.

And, you can see Brown's first name was William. "Gates" was a nickname given to Brown by his mother. He says he has no idea why his mom called him "Gates."

Other blog stuff: You may have noticed I took the day off on this blog yesterday. Things are a little hectic now. I hope I'm back on a regular schedule, but it's a little uncertain at the moment.
Posted by night owl at 1:52 AM

Does that mean he was the original Bill Gates? I hope you have a non...un...less hectic day today.

The story I have heard is that "Gates" referred to the two years that he spent in the Ohio State reformatory.

I had never heard the hot dog story before - hilarious.

It's funny you use the phrase "roundish stature," I see a lot of Kirby Puckett in Gates.