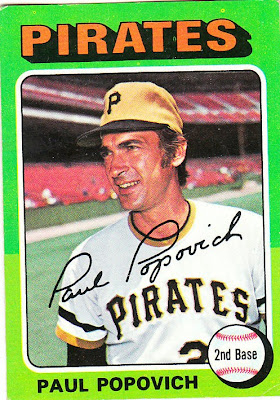 Card fact: This is the final card of Paul Popovich released during his career.

What I think about this card now: I think maybe the only reason Popovich received a card in this set is because Topps was pretty proud it had a photo of him in a Pittsburgh uniform. Popovich was acquired by the Pirates in early April of 1974. That seems like plenty of time to get a photo of Popovich as a Pirate, but it was cutting it close back in those days.

Also, Popovich seems to have aged quite a bit when you compare this card with his card in the 1969 set.

Other stuff: Popovich was a career-long middle infield substitute for the Cubs, Dodgers and Pirates. He could field, but he finished with more than 400 at-bats in a season only once. That was in 1968 when the Dodgers were so dreadful that a guy batting .232 could play 134 games at shortstop. Despite his inability to land a starting role, he played for 11 seasons. 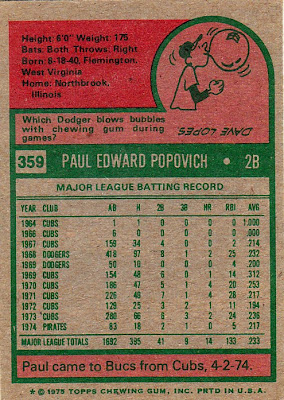 Back facts: I have already expressed my amazement with the cartoon.

Other blog stuff: I recently received some upgrades of some of my '75 Topps cards from reader and fellow '70s vintage blogger wobs, who operates 1974 Topps-Pennant Fever. He noticed some of my scans had "slanted" backs and borders, which they do. It was very nice of him to send these along: 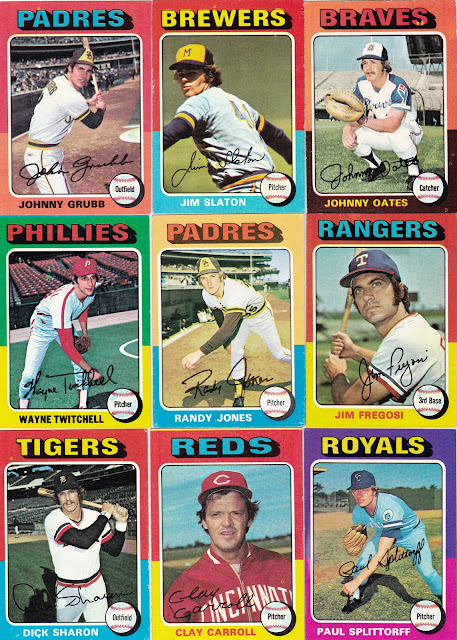 I especially appreciate the Jim Fregosi card, which has been a thorn in my collecting side for years and years.

I always loved how the 75 set looked when grouped together.

I have to say I agree with Johngy, they look great in that little love fest scan.