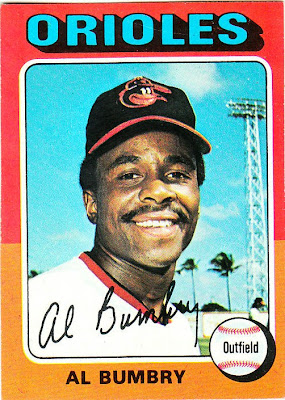 Card fact: We are in the midst of a run of "red-orange" bordered cards. This is two straight for the "Burger King" color combo, and there are a few others coming up real soon.

What I thought about this card then: I pulled this card on a very hot day during the summer of 1975. Our family was on vacation and this card will always remind me of summertime as a kid.

What I think about this card now: The light tower on the side and the palm trees in the distance make Al Bumbry look like a giant, which he most certainly was not.

Other stuff: Bumbry was the American League Rookie of the Year in 1973. He was one of those players who always seemed on the verge of greatness, but would then suffer a setback, either because of an injury or simply a slightly disappointing season. I remember him hitting the crap out of the ball in 1977, then missing almost all of 1978. Then he became an All-Star in 1980 and hit .318 for the season. A year after winning the rookie of the year honor, he hit .233.

Bumbry was known for his speed and stole 254 bases in his career. He played almost his whole career for the Orioles, except for his final season in 1985 when he signed as a free agent with the Padres.

Bumbry's son, Steve, was selected by the Orioles in this year's amateur draft. 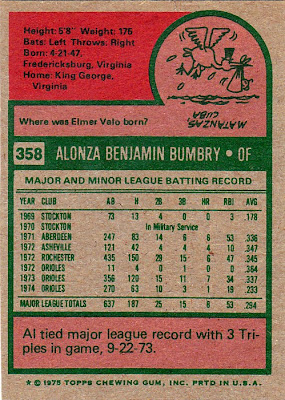 Back facts: The "military service" line intrigued me as a child, but not enough to find out what it meant. All I knew was Bumbry went away somewhere. Little did I know that "away" was Vietnam.

Other blog stuff: Here is the Bumbry card I pulled on the hot summer day: 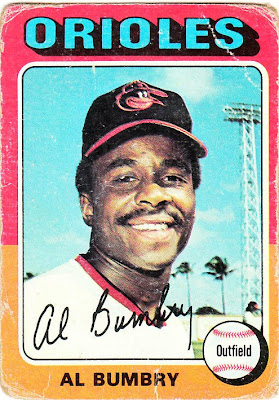 A minor correction: The O's drafted Steven Bumbry in 2009, not this year.

His 252 steals (the other two were with the Padres) were the most of any Oriole until Brady Anderson passed him. Brian Roberts also bypassed Bumbry late in 2009 and should surpass Brady in a couple years if he can stay healthy.

He does look like a giant (yuck, it's distateful to say that word) and it appears to have been a windy day judging by the palm trees.

I have Stevie Wonder's "Frontline" stuck in my head after reading this installment of Back Facts.