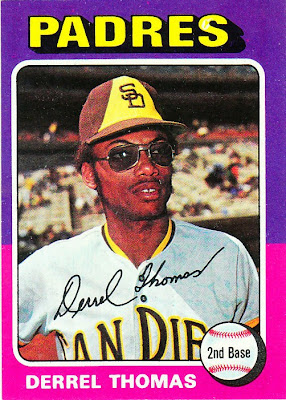 Card fact: Another large gap for the "purple-pink" color combo. It's been 38 cards since the last one. This color combination has really fallen off the pace.

What I thought about this card then: I didn't see it. It's been 10 cards since we've come across a card that I didn't see in 1975. I think that's a record.

What I think about this card now: Derrel Thomas looks slightly P'Oed.

Other stuff: Thomas, the No. 1 pick of the 1969 free agent draft by the Astros, became a starting infielder for the Padres and Giants, then transformed into a valued utility guy for the  Dodgers. He played every position except pitcher during his career. He played five games at catcher for the Dodgers in 1980 (L.A. loved putting him all over the field).

Thomas was acquired by the Dodgers before the 1979 season and served as the team's starting center fielder for much of the year. He played on the World Series-winning L.A. team in 1981, but didn't play in the Series against the Yankees. In 1983, Thomas went 4-for-9 for the Dodgers in their NLCS loss to the Phillies.

After Thomas' career ended in 1985 (he also played for the Expos, Angels and Phillies), he fell into drug problems and spent 47 days in prison on cocaine charges. He later spoke to groups about his 1992 prison term and led clinics. He continues to work in the Dodgers' organization. 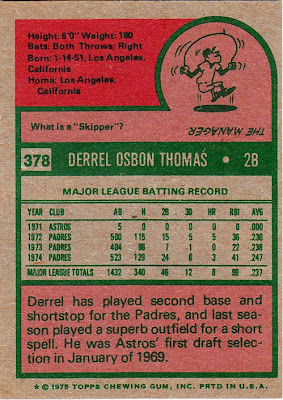 Back facts: Thomas played in 20 games in the outfield for the Padres in 1974, 19 of them in center field. He also played 22 games at third base in '74, which is 17 more than he played at shortstop, but apparently Topps was not impressed.

Also, I really want to put an "r" in Thomas' middle name.

Other blog stuff: In honor of Rodney Dangerfield, who was born on this date 89 years ago:

"I went to see my doctor. I said, 'Doctor, every morning when I get up and look in the mirror I feel like throwing up. What's wrong with me?' He said, 'I don't know, but your eyesight is perfect.'"
Posted by night owl at 12:38 AM

I remember that Al Campanis (the Dodgers GM) was so enamoured with this guy as a catch all utility player that when Thomas moved on in the early 1980's that Al gave away John Franco (for Rafael Landestoy) and later Sid Fernandez (for Bob Bailor and others) in questionable attempts at finding a replacement.

According to baseball-reference.com there IS an 'R' in Thomas' middle name.

The draft in which Thomas was selected #1 overall was not the main entry draft (which is held in June), but a second, smaller draft that MLB used to hold each year in January. I have to admit that I'm not really clear on the purpose of the January draft, or exactly how one became eligible for it. IINM, it was eliminated back in the 1980s.

Not the most handsome guy in the world. I've got Derrel and some other ugly 70s players you might enjoy right here: