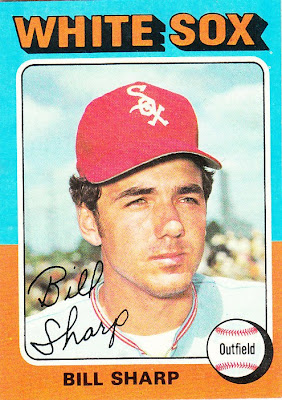 Card fact: Bill Sharp received three Topps cards during his major league career. This is the second of the three.

What I thought about this card then: My brother had this card. It was not one of our favorite cards. But it wasn't one of the cards that we poked fun at in 1975. Just missed the cut, I guess.

What I think about this card now: I can see why we didn't like it as kids. The hair sticking up out of his cap is a little annoying.

Other stuff: Sharp was a defensive standout who was picked in the second round of the 1971 amateur draft by the White Sox. He started well during part of a season in 1973, and remained a regular in the outfield for the White Sox in 1974.

Chicago traded Sharp to Milwaukee in May of 1975. He continued to start for the Brewers into the 1976 season, when a knee injury began to affect his playing time. He didn't play in the majors after 1976. 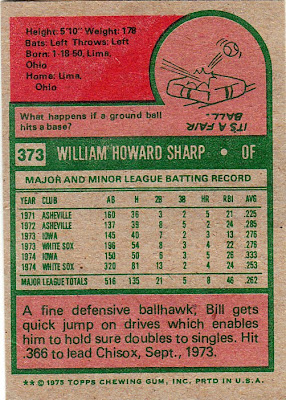 Back facts: Topps likes the term "ballhawk." It was used in one of the cartoons earlier in the set. I also like Topps' long-winded praise of Sharp's defensive abilities.

Other blog stuff: Tom Seaver is 66 years old today. I just posted his card over the weekend. I'll feature a card of someone on his birthday yet!
Posted by night owl at 12:38 AM

Bill sure has a "sharp" signature. I know, I know, that was bad. If I just saw his face, I would swear that was the older brother of one of my best childhood friends.