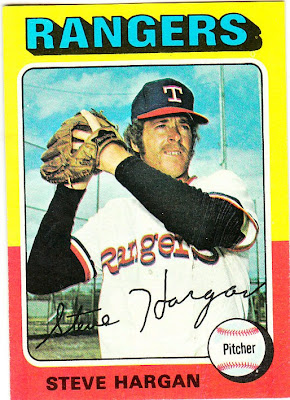 Card fact: This card marks Steve Hargan's return to the Topps set after a three-year absence. His previous Topps card was in the 1972 set. He had a card ever since 1966, but he fell into rough times in the early '70s.

What I thought about this card then: This is what a Texas Ranger should look like, and Hargan is probably one of the reasons why I think all the Rangers should have wild hair and a mustache. This was one of the early cards I received in that first year of collecting and I thought Hargan was at least 8-feet tall. Later, I saw his 1968 Topps card for the first time, and I couldn't believe it was the same person.

In fact, Hargan is also clean-shaven in his 1972 card, too. That was right before he "went away" for two years. By "went away" I mean he toiled in the minor leagues, but given his drastically changed look doesn't it seem like he did hard time?

What I think about this card now: It looks like his uniform shirt is untucked. I hate that Prince Fielder crap. Tuck your shirt in mister.

During that time, he was acquired by the Rangers. He bounced back in 1974 with a decent season, then had two so-so years before getting drafted by the expansion Blue Jays. He finished up his major league career with Atlanta in 1978. 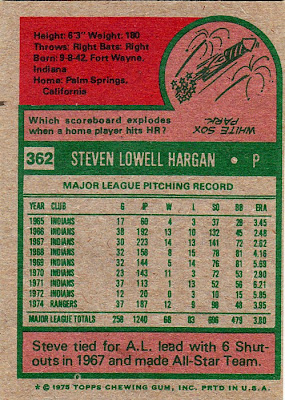 Back facts: I'm quite sure I didn't take the cartoons literally when I was a youngster, otherwise I would be really freaked out that there was a scoreboard that actually EXPLODED. 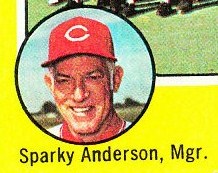 RIP, Sparky. I think your enthusiasm and positive attitude will continue to serve you and your family well.
Posted by night owl at 2:56 AM

Hargan does look a bit like an outlaw. It's nice to see the Rangers represented so close to the World Series.

I believe Hargan started the first MLB game I ever attended. Against the Red Sox at Fenway in 1974. The Sox won.

I actually DID take cartoons literally and figured they must have a bunch of back-up scoreboards ready to put in place if one was destroyed after a home run.

Hargan had the 3rd best ERA in the American League in 1966, and appeared on the ERA leaders card in 1967, along with the White Sox' Gary Peters and Joel Horlen.