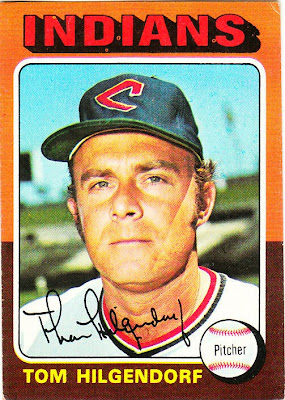 What I thought about this card then: Tom Hilgendorf is the poster-child for those cards that featured players who looked much older to me than they actually were. (I guess in this case poster-child isn't the best phrase. But "poster-man" doesn't sound right).

I had Hilgendorf pegged for 48 years old. His 1976 card doesn't do him any favors either. Hilgendorf was actually 32 when this card came out.

What I think about this card now: Is Hilgendorf wearing his cap tilted to the side? Well there's nothing "old" about that.

Other stuff: Hilgendorf was a relief pitcher for the Cardinals, Indians and Phillies between 1969-75. He was actually signed in 1960, and it took him nine years to make the majors. Hilgendorf was a lefty specialist for the Indians. After being traded to the Phillies, he enjoyed his best season in 1975, going 7-3 in 53 relief appearances with a 2.14 ERA. But the Phillies released him at the start of the 1976 season. He was picked up by the Pirates a week later, but never pitched in the majors again.

Hilgendorf was one of the victims of the famed "Ten-Cent Beer Night" in Cleveland in June of 1974. The game eventually was forfeited to the Rangers because of drunk, rowdy fans. A riot erupted in the 9th inning, and the players armed themselves with bats for fear of being harmed. Hilgendorf suffered a concussion when he was hit by a steel chair. The next day, he pitched in relief and got the win. 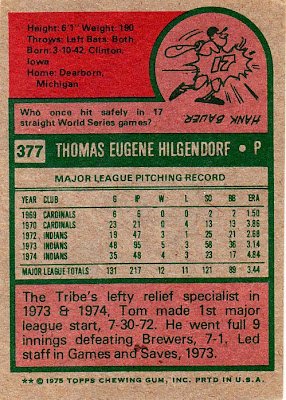 Other blog stuff: Ken Griffey Jr. was born on this date in 1969. He's 41. And he still looks younger than Hilgendorf on this card.
Posted by night owl at 4:17 AM

10 cent beer night. It's hard to believe anyone would think that was a good idea.