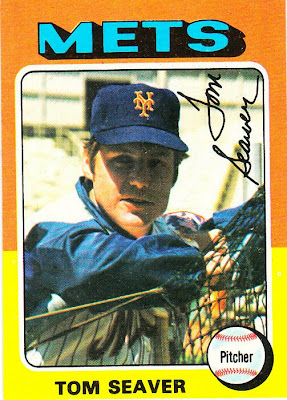 Card fact: The first sideways signature in the set. But it's not a terribly uncommon occurrence.

What I thought about this card then: I don't think I actually saw this card in person. I probably saw it in a magazine or other publication. I know it was a desirable-yet-unattainable card for me.

I've mentioned this before, but the first baseball glove I ever owned was a Tom Seaver model in 1976. I changed my favorite team to the Mets and my favorite player to Tom Seaver for one day, the day I received the glove. I quickly realized that was foolhardy and changed my favorite team back to the Dodgers. But for a long time after that, I hoped that Seaver would get traded to the Dodgers. It wasn't an unrealistic expectation, as there were rumors all the time in the '70s that Seaver would be traded to L.A. (he was originally drafted by the Dodgers).

What I think about this card now: The Mets have a lot of cool "hanging out by the batting cages" cards in this set. Unfortunately, the shadows detract a bit from the photo, although at the time I thought it added to the mystery and coolness of Seaver.

Other stuff: I often wonder what it was like to be a baseball fan during Seaver's breakout seasons in the late 1960s. By the time I knew who he was, in the mid-70s, he was an established star and the Mets were slowly sinking to the basement of the NL East. Still, it was major news when he was traded to the Reds in 1977. Dubbed the "Midnight Massacre" in New York, I still remember reading about it in the newspaper while seated on the floor of our living room.

As the years go on, Seaver's later years grow hazy. I barely remember his time with the White Sox, although I do recall being very happy that his 300th win came against the Yankees. I just had to look up the reason why Seaver didn't pitch in the postseason for the Red Sox in 1986, his final year. I forgot about the knee injury.

Seaver has worked off-and-on as a broadcaster, both for the Mets, Yankees and network television. Although he seemed capable, I wasn't a fan of his most recent stints with the Mets. He seemed to make every excuse to bash current players. He and Keith Hernandez would have a field day. 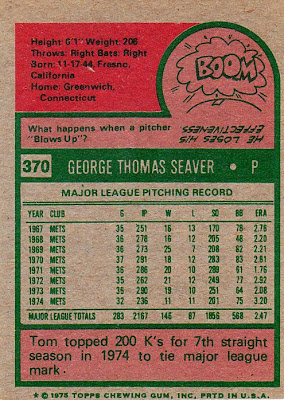 Back facts: I believe Tom Niedenfuer "blew up" in the 1985 NLCS against the Cardinals.

Seaver leads the National League in most seasons of 200-plus strikeouts with 10. Roger Clemens leads the American League with 11. Nolan Ryan is the overall leader with 15.

Other blog stuff: On this date in 1974, Steve Garvey won the National League MVP award. Say what you want about Garvey, but there are a lot more Dodger fans out there because of him. (Yes, yes, he probably fathered some of them). And, yup, that is a good thing.
Posted by night owl at 2:00 AM

I've always liked that card and I had it at one time. I traded it to my best friend (I should hate him for it now I guess).