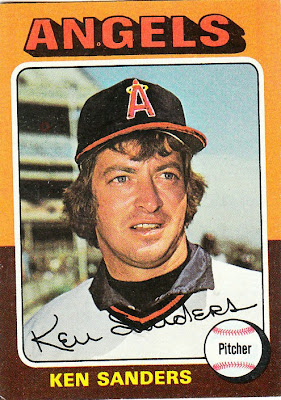 Card fact: Ken Sanders is airbrushed into an Angels cap on this card. He was released by the Indians in mid-season of 1974 and picked up by the Angels a week later.

What I thought about this card then: It absolutely freaked me out. I just addressed this card on the other blog. I was disturbed by the ball player who kind of looked like a woman -- but not really. Unlike some of the other players that we laughed at and tried to sneak into friends' collections, this card genuinely bothered me. I didn't want it in my collection at all.

What I think about this card now: I don't know why guys got haircuts like that in the '70s.

Other stuff: Sanders was a career relief pitcher for 13 seasons and nine teams from 1964-76. He started just one of the 408 games in which he appeared. His best stats are the 1.75 ERA he put up for the Brewers in 1970, and the league-leading 83 games he appeared in for Milwaukee in 1971.

But Sanders didn't play for an above .500 team (except for a brief appearance with the '68 Oakland A's) until the end of his career, which explains his 29-45 career won-loss mark. After his career, Sanders went to work for the Players Alumni Association. He also built a successful career in real estate. 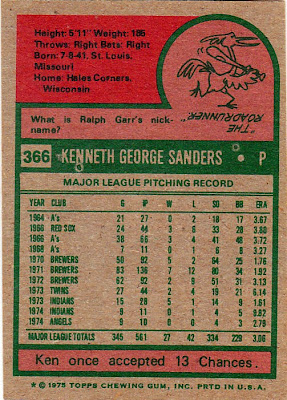 Back facts: The write-up sounds so formal. "Accepted chances"? Does that mean he had the option of turning down the ball if it came to him? According to Baseball Almanac, 13 chances is the record for a major league pitcher, but Sanders is not listed. Perhaps Sanders' feat happened in a minor league game.

Other blog stuff: Television's "The Incredible Hulk," Lou Ferrigno, was born on this date in 1951. Too bad we don't have a card with a green-purple color border today. It was named in honor of the Hulk.
Posted by night owl at 2:04 AM

He had a couple of great years for the early Brewers, when they were awful.

That has to be a minor league game - he had one career start in the bigs! He lasted 4 innings in what looks to be an emergency start.

(In looking for the Sanders game - I came across his teammate in Boston and KC in 1966 - Guido Grilli. No I'm not making it up...)

This card shows him at what looks like Shea Stsdium. He might have taken this shot while with the Indians, but that wouldn't explain a Shea photo. He did play for the Mets in '75, though. Is this Shea? I don't know of any AL park that looks like this.

The Yanks played at Shea in '74 while Yankee Stadium was being rebuilt. That explains the pic.

Funny you think he looks like a woman on this card. I always thought he looked like Larry Fine from the Three Stooges.