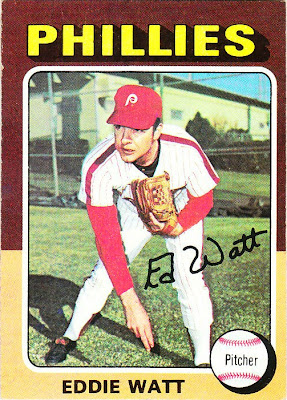 Card fact: This is the final card Topps issued of Eddie Watt during his career.

What I thought about this card then: I had the mini card. I didn't have a lot of the 1975 set back then, but I sure did have a lot of Phillies pitchers -- Watt, Schueler, Twitchell, Ruthven. Yet, the Steve Carlton card eluded me.

Anyway, I do remember wondering why Watt was all hunched over and low to the ground. Even back then I knew a fake pitching pose when I saw one.

What I think about this card now: It looks like Watt is posing in a community park. The department of parks and recreation building appears to be looming behind him.

Other stuff: Watt was almost exclusively a relief pitcher during his 10-year career in the majors. He played with the Orioles from 1966 through 1973 and was one of the key relievers out of the bullpen during Baltimore's glory days between 1966 and 1971. He reached double figures in saves each year between 1968 and 1971.

Watt was purchased by the Phillies during the offseason of 1973. After one year with the team, he was released right before opening day in 1975. So this card was inaccurate by the time collectors got ahold of it in '75. Watt finished up his career with the Cubs in 1975. 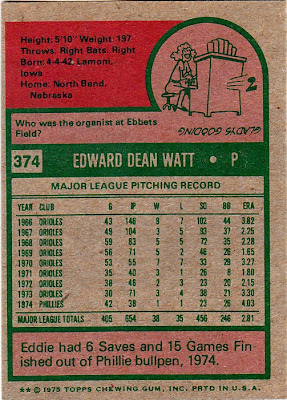 Back facts: I can't tell you if that's an accurate likeness of Gladys Gooding. But I do know she's the most famous baseball organist ever. She started out playing the organ for the New York Rangers before being brought over to Ebbets Field. She played there from 1942-58 and was hugely popular.

Other blog stuff: As you know, I like to feature the mini card next to the regular-sized card periodically. Here is big Watt and little Watt: 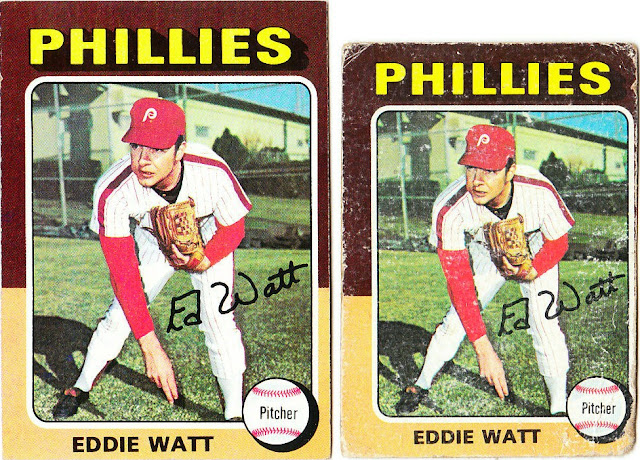 Both of them are nicely miscut.
Posted by night owl at 12:51 AM

Interesting...I don't know why it commented twice. It told me the verification word I typed in didn't match so I did it again. Obviously it worked the first time.

I never liked this card as a kid and it still seems odd to me. Maybe the pose (looks awkward), maybe the colors (look fake somehow).
Anyway, I once sent Watt's wife a bunch of his cards. I asked if they had any pictures of him from his short stint with the Cubs., but they didn't.
I always wondered about athletes getting pictures in each uniform. I would think I would make sure to have at least one shot in the uni. Maybe that's just my pettiness.

The colors do look bad: There's nothing even vaguely red on the card except Watt's uniform, so it looks weird.