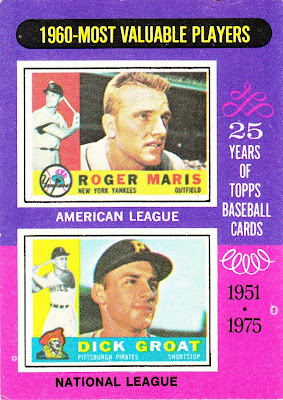 Card fact: This card displays the last horizontal flagship set that Topps has ever produced. The 1960 set was another colorful one and also featured the large mug shot with the smaller black-and-white action shot, much like the 1955 set. In fact, the 1960 set looks a lot more like a '50s set than it does a '60s set.

What I thought about this card then: Now, I KNOW this was one of the first cards that I ever pulled from a pack that I had purchased. You'll see it in a minute. No real thoughts back then other than Maris' crew-cut seemed rather different to me. He looked like a tough guy.

What I think about this card now: I'm so familiar with the beat-up version of this card that I pulled in 1975 that the newer version still looks odd.

Other stuff: I'm sure not a lot of people outside of Pittsburgh remember or even have heard of Dick Groat. He played for some terrible Pirates teams as Pittsburgh's regular shortstop in the 1950s. But he was fortunate enough to be around when Pittsburgh returned to the World Series in 1960. He also finished second in the MVP voting in 1963. Somebody named Sandy Koufax beat him out that year. 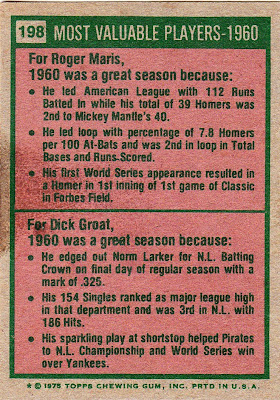 Back facts: I looked up Norm Larker's stats for 1960 and I think he could make a case for getting screwed out of the MVP award. Groat basically benefitted from having more at-bats, which led to more hits and runs. But Larker had more RBIs, and better slugging and on-base averages. Of course, I'm a Dodger fan, so I'm a bit biased.

OK, now you're asking why I haven't said much about Maris. Yankees get talked about so much. Time to give it a rest.

Other blog stuff: Here is the card that I pulled when I was 9 years old: 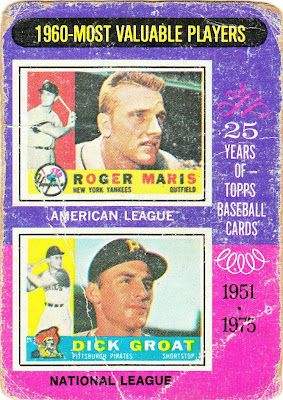 Yikes. That thing is disintegrating from the outside in.
Posted by night owl at 2:21 AM

I'm not anti-Groat, anti-Pirate or anti-shortstop. But I'm not sure ANYBODY with only two homeruns should be in serious contention for the MVP. Unless of course they strike out 300 batters.

I just discovered your blog. Great job. I was in the waning years of collecting in 1975, so I didn't get many 75's. I rediscovered them years later and was fascinated by the different colors. Hats off to Topps for taking such a bold chance once in a while.

Two bits of trivia on Groat:

1) He never played in the minors at any point in his career. When Pittsburgh signed him out of Duke University in 1952, they sent him straight to the majors. If you look at his major league record, you'll notice that 1953 and 1954 are missing, but that's because he was in the Army during those years. When he returned from the service in 1955, he went right back to the majors.

2) Coming out of college, Groat was also considered to be a major league caliber prospect in basketball. He was a first round pick in the 1952 NBA Draft and played part of the 1952-53 season with the Pistons before getting inducted into the Army. When he came out of the service, he announced that he planned to concentrate on baseball and did not return to the NBA. At the time, I'm sure pro baseball salaries were much higher than pro basketball salaries -- in the early/mid '50s, the NBA barely qualified as a "major league" -- and pro baseball players also tended to have much longer careers.

I think Topps should try another horizontal flagship set. It's time.