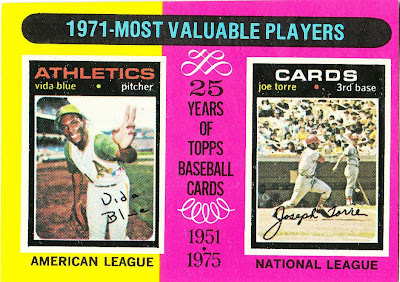 Card fact: The '71 MVP card offers examples of the '71 Topps design, one of the best card designs ever created. It is one of my favorite sets, and I have admired it ever since I was a kid and I found a 1971 card of Manny Mota lying in a street gutter.

What I thought about this card then: This is one of the cards I pulled from the first packs I ever bought back in '75. Both card pictures left an immediate impression and stayed with me until this day. Obtaining either of these cards, for me, is akin to hanging one of the most famous paintings in the world in my living room. When I gained the Joe Torre card, I couldn't believe it was actually in my collection. I felt like I was practically stealing it when I made the trade for the card. I held it in such esteem.

I am still waiting to acquire the Vida Blue card. That will be a great day, too.

What I think about this card now: I still can't get over the greatness of each card. Blue still looks like he's giving the peace sign, just as I thought he was as a kid.

Other stuff: Vida Blue had pitched in all of 18 games before he had his MVP season. One of those games was a no-hitter against the Twins. Blue was my kind of pitcher. He threw hard and he was left-handed. 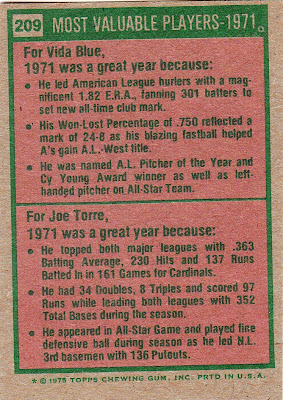 Back facts: Great stats all around. I had them memorized as a kid.

Other blog stuff: Here is the original '71 MVP card that I pulled when I was 9: 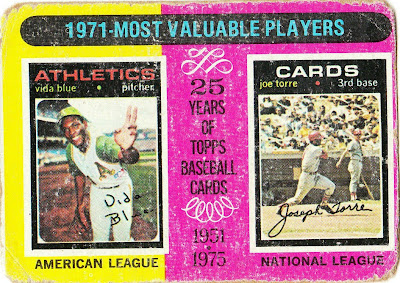 I knew Torre had the MVP...I just didn't know the numbers. Amazing.

I've always loved cards that feature black. Topps has done it a couple times since then. And the 1971 is great except one thing ... the lower case letters in the name and position always bugged me. Otherwise it's classic.