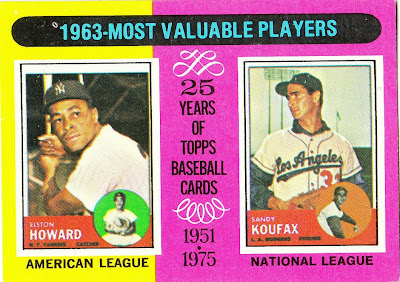 What I thought about this card then: Never saw it. It was one of the last MVP subset cards that I needed to finish the set.

Other stuff: It took me a long time to figure out who Elston Howard was. Even to this day I'm a little hazy on early 1960's Yankees. Tom Tresh, Johnny Blanchard, Clete Boyer. I don't know a lot about them. Now, Koufax, I know. One of the first full-length books I ever read was a biography of Koufax. I remember absorbing every word during free reading period in fourth grade. Since then, I've read several books either about Koufax or about the Dodgers during his time with them. 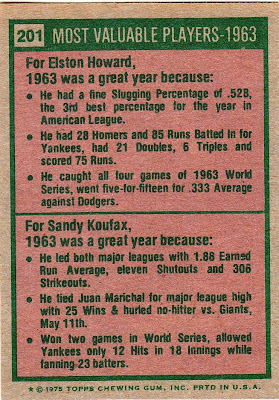 Back facts: What a killer season for Koufax. A 1.88 ERA and 306 Ks AND 11 shutouts? A no-hitter against the Giants? A dominant World Series against the Yankees? Oh if only I was alive in 1963.

Other blog stuff: Happy birthday to former Dodger pitcher Rick Rhoden, who is 57 today. I'm guessing he'll celebrate on the golf course.
Posted by night owl at 1:51 AM

If you were alive and old enough to appreciate that season...say 10 years old...then you'd be 57 today. We all like you just the way you are. (That didn't sound creepy in my head, but it LOOKS creepy on the screen).