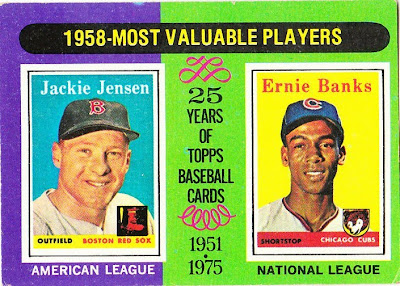 Card fact: This card depicts the 1958 Topps set, which marked a return to some of Topps' earlier sets in a couple of ways. The one-color backgrounds were back and the team logos were back. The '58 set reminds me a lot of the '55 set, except there is no second photo and it's not horizontal and the size of the cards are smaller.

What I thought about this card then: This is one of the cards that I pulled very early in my first year of collecting. Again, I couldn't tell you whether it was one of the cards in the first three packs that I ever bought. It could have been.

What I think about this card now: Why is it that the players from 1958 look OK on the '58 card design, but when Topps Heritage placed current players on the '58 design for its 2007 set, a lot of the players looked hideous? Are players more disturbing-looking today?

Other stuff: Jackie Jensen was out of baseball three years after collecting his MVP award. He began to tire of the transient life of a major league ballplayer and wanted to spend more time with is family. He also had a fear of flying. He tried to return to the majors for one year in 1961, but the results weren't to his satisfaction and he quit for good. 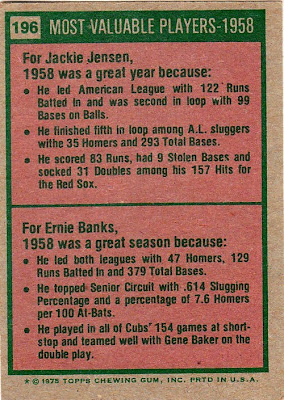 Back facts: Nice of Topps to work Gene Baker into Ernie Banks' MVP write-up. That makes two times that Gene Baker has been mentioned in the 1975 set. Someone at Topps must've been a Baker fan.

Other blog stuff: Here is the card that I pulled in 1975. Not a sharp corner to be found: 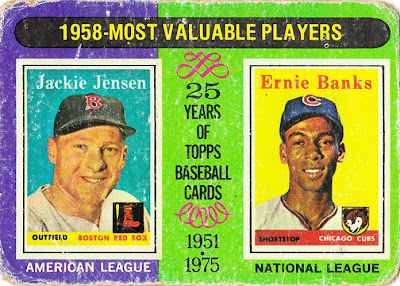 I'm no Bill James, but I know more about baseball history than all of my friends. I'm also a Red Sox fan and I've had the 1975 Topps complete set since 1976. But I don't ever remember hearing of Jackie Jensen.

I'm with Egg...I have to admit I hadn't heard of Jackie Jensen until I read this post. See, blogs ARE good.

My first exposure to Jensen was reruns of the old Home Run Derby that I saw on ESPN some time around the late 80's. I had never heard of him as a youth.