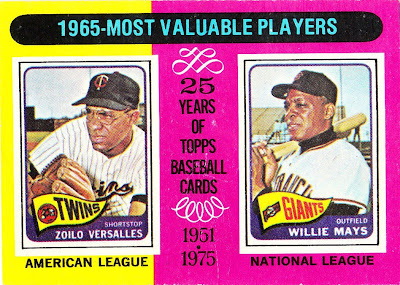 Card fact: With this card, we have a look at the 1965 Topps set, which is my favorite set of the 1960s. You have to love the pennant flags, and I always enjoyed the blue card backs.

Again, Topps assigned random color schemes with teams. Most, as you can see with these two examples, did not match the team's colors. The Yankees received pink. The Phillies blue. The Dodgers gold. I actually liked some of the non-matching patterns. I think the Red Sox cards, which have green borders, look sharp.

What I think about this card now: It pains me that Sandy Koufax did not receive the MVP in 1965. I know Mays hit 52 home runs, but, damn, Koufax was great in 1965. He also won a World Series.

Other stuff: Without doing any research, I'm betting that someone else had better stats than Zoilo Versalles in 1965. I know that opens me up for criticism, but the guy did next to nothing with the Dodgers three years later, so I'm a little bitter. 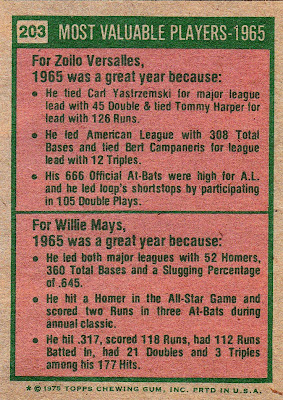 Back facts: There's a typo in the Versalles write-up. Missing "s" on the word "doubles."

Other blog stuff: Today is the birthday of Reggie Jackson and Brooks Robinson. But it's also a notable birthday for my little brother. Unbelievably, he is 40 today. That's crazy.
Posted by night owl at 3:30 AM

In continuing with the error on the back of the card, I too left the "s" off doubles.

Going through my 1966 Topps set a while back, I was looking at the back of Tony Oliva's card and it said he'd won the '65 MVP Award. Knowing the real MVP was Versailles, I looked for his '66 card and sure enough, they credited him with that, too!