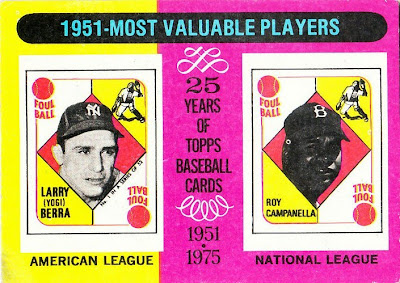 Card fact: This is the first card in a 24-card set celebrating 25 years of Topps cards by showing the MVPs of the previous 24 years.

What I thought about this card then: Never saw it. It was the last MVP card that I obtained for the set.

What I think about this card now: As cool as it is to own a card from 1951, it's really a hurtin' set. Not a great debut by Topps.

Other stuff: This subset is really Topps' first celebration of its legacy in card collecting. Today, Topps can't go a day without reminding you that it has a proud history of making cards. In fact an entire card brand (Heritage) is based on that idea. But in 1975, it was a new concept.

Topps took the MVP from each year and displayed the card of that player during that particular year. It was a great idea. However, for some of the years, Topps did not make a card of the MVP. One of those years was 1951 and Roy Campanella. He was not featured in either the red back or blue back sets in 1951, so Topps created a "Card That Never Was." You can tell it's not an actual card by looking at the Berra card. The Berra card features the card number along the "first base line" of the diamond outlining the photo. It says "No. 1 in a series of 52." But the Campanella card has no card number.

I really liked this subset. It was very cool getting a look at what card sets looked like in the past. Since this was my first full year of collecting cards, almost all of the card designs were new to me, and it was my introduction to Topps history. 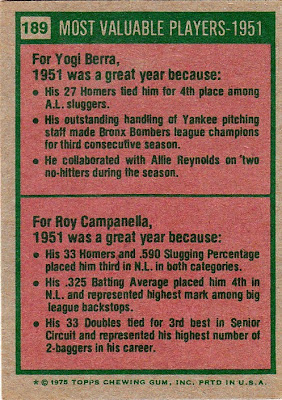 Card facts: The backs of the cards are pretty blah. I did learn a little bit about each MVP's year, but after reading them once, there was really no reason to look back there again.

Based on what they have listed for Berra, I think someone else in the American League got screwed in 1951.

Other blog stuff: Topps used just three color combinations for the MVP subset -- pink-yellow, green-purple and purple-pink. Expect those three color combos to take huge leaps in the color-combo standings.
Posted by night owl at 2:51 AM

I had an Easter flash back when the blog came up...that's a lot of pink and yellow. I had a couple of these once upon a time, but unfortuately they went the way of the GIANT garage sale.

They had to create a card for Campanella, and they gave him "foul ball"? Maybe they just used the Berra Card as a template, but still....

As far as who got screwed...

Of course, Williams was used to getting screwed. When he hit .406 in 1941 he placed second in voting to Golden Boy Joe DiMaggio.

So Williams stepped it up in 1942 and won the triple crown. But he still was robbed of an MVP award, this time by another Yankee, Joe Gordon who lagged behind Williams in Every offensive category except stolen bases. Those 12 swipes must have really been something.

Not only is that Campy card a mock-up to replace a card Topps didn't issue, The Berra card isn't exactly a replica of his '51 Topps card either. The photo is a little closer than in the original set...and the short write-up that appeared below his name on the original card is gone. Perhaps Topps realized that the print was too small to read on the reduced-sized card and just cut it out?