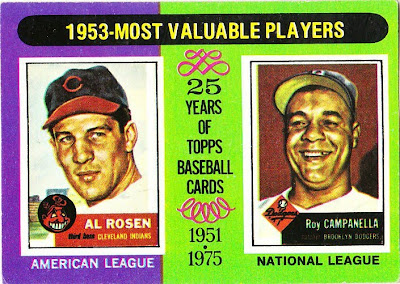 Card fact: Topps is showing the much-beloved 1953 set, which attracts praise for its hand-painted drawings. I'm still a photo guy over a paintings guy, but most of these cards annihilate any "art" sets of today.

What I thought about this card then: The Rosen image freaked me out. I thought he looked about 200 years old, and I'm sure the painted accents on his face led to my feelings. I also didn't like the Campanella card. It looked ominous and dark to me. I know that Campy is smiling. But the whole thing was a little freaky.

What I think about this card now: I was a weird kid.

Also, note the attention to detail on the two cards: Rosen's nose was broken 13 times during his career and it looks it. Campanella's smile features a missing tooth.

Other stuff: Al Rosen, one of the all-time greatest Jewish players, doesn't get mentioned as one of the stars of the 1950s as much as others from that era do. It's probably because his career ended pretty quickly. After tremendous seasons from 1950-54, his career was over by 1956. 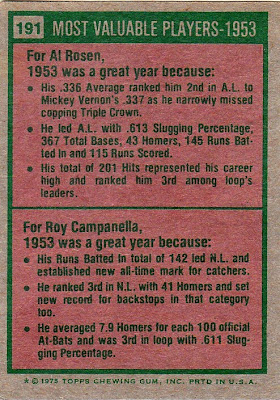 Back facts: Each player enjoyed a fantastic year in 1953. Well-deserved awards.

Other blog stuff: The "green-purple" combo has just moved into third place overall with this card. It could be leading all the combos by the end of this MVP subset.
Posted by night owl at 1:39 AM

I always like the green-purple combo, even though it wreaks havoc on the eyes.

I never realized how close Rosen was to a Triple Crown.