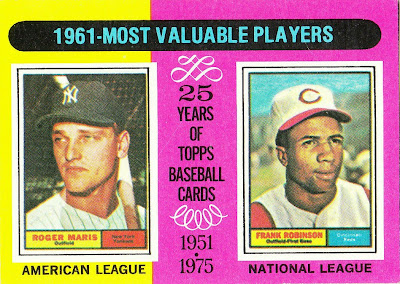 Card fact: This card features the 1961 Topps set, easily the most subdued set since the 1952 issue or perhaps ever. Personally, I find it quite boring. Some say it goes with the minimalist thing going on during the 1960s. Whatever. Dull is dull.

What I thought about this card then: I had the mini card. Not too much went through my mind about it.

What I think about this card now: We've gotten to know the 1961 Roger Maris card well this year with Topps' "Cards Your Mom Through Out" insert set. It's probably as close as I'll get to a real '61 Maris.

Other stuff: Back-to-back MVP awards for Maris and the first of two MVP awards for Frank Robinson. I know too little about Robinson's Reds years, other than the reason that he was traded to the Orioles. In fact, after first equating Robinson with the Orioles, I next think of him as an Indian. That's just wrong. 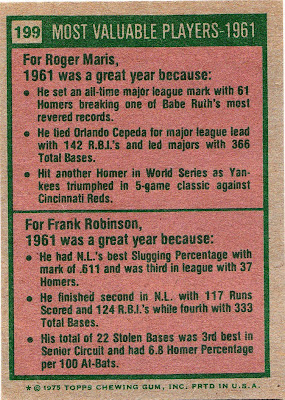 Back facts: Crazy stats for both of them. I find the mention of slugging percentage in 1975 interesting. I don't recall it as a stat that was used a lot back then.

Other blog stuff: Here is the standard-sized card and the mini-card side-by-side, just so I can show you this in a horizontal format: 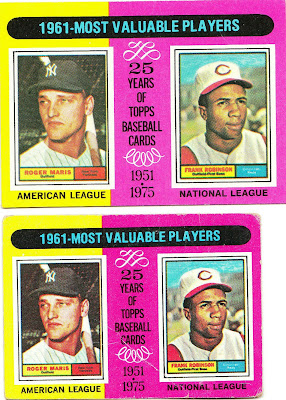 Pink/Yellow is such disturbing color combo. The '61 set is a little dull, even lifeless, but it beats the Heritage copies this year. At least those are some great old stars on the originals.

My big problem with the '61 set is the fact that -- because of the first wave of expansion that year -- it marks the beginning of the era where Topps used an awful lot of "hatless" shots for players who had been drafted by the new teams or traded.

The result: baseball cards where the guys shown look less like athletes and more like your Uncle Bob. And Uncle Bob was no athlete.

Clemente should have won the NL MVP that year.