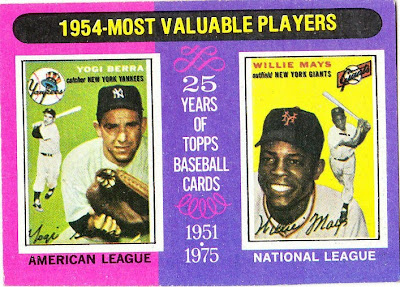 Card fact: Topps features the 1954 set on this card. Topps continued to be innovative in '54, using a close-up photo of the player coupled with a smaller, black-and-white action image. Both images were cut-outs, placed in front of a monochromatic background. The background colors interchanged between green, yellow, red, blue, orange, as well as white. Had I been alive then, I would have thought it was very cool.

What I think about this card now: I'm impressed that most of the cards in the '54 set are photographs. Quite the switch from 1953.

Other stuff: What new can I say about Berra and Mays? I guess I can wish Willie Mays a belated 79th birthday. 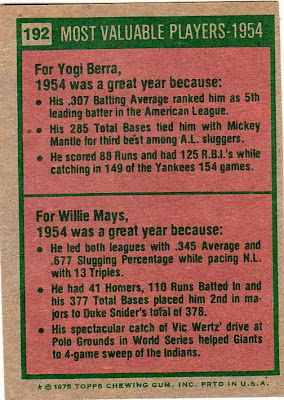 Card facts: Berra's 1954 season was better than his 1951 season in which he also won the MVP award. But as you can see by the info in the Willie Mays write-up, Berra didn't get to the World Series in '54 like he did in '51.

I don't remember if it was the '54 or '55 Berra, but one of those two was one of the only non Cardinal cards the "Old Man" from my series of posts would not trade.