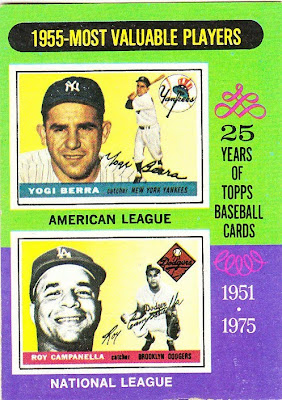 Later, we will see what Topps did when it came across a set in which one of the MVPs had a vertical card and one had a horizontal card.

With this card, Topps shows the 1955 set, which was the first time it went with an entirely horizontal format. Topps again went with a large mug shot image and a smaller action image. There were a few slight differences from the 1954 set. The backgrounds featured various colors again -- yellow, blue, red, etc. -- but were displayed in a gradient fashion. Also, many of the player images were painted this time. But a great many of the images used in the 1954 set reappear in the 1955 set.

Roy Campanella did not appear in the 1955 Topps set (nor the 1954 set as he was a Bowman player). So once again Topps dummied up a 1955 card for this subset, going with an all-black & white look (and an L.A. cap), which seems very out of place in this colorful set.

What I think about this card now: I think I used up all my thoughts above.

Other stuff: Are we sick of Berra and Campy yet? This is the third time each of these players have appeared in the subset as they each won three MVP awards between 1951 and 1955. I am sure that the fact the Yankees and Dodgers kept appearing the World Series had something to do with that. 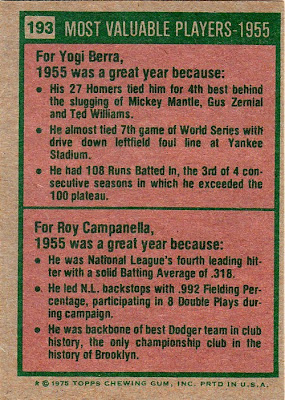 Back facts: The stat information isn't all that glowing for either player, again making me wonder if someone was more diserving in both leagues.

Other blog stuff: Players in this set celebrating birthdays today: Steve Braun (card No. 273) and Dennis Leonard (No. 615). Both former Royals.
Posted by night owl at 2:39 AM

Love the LA hat on Campy! I wonder if he would have been able to revive his career in Los Angeles with that short left field fence.

Duke Snider had a better year than Campy, but Campy was a popular and well-loved player.

I don't know if I've ever seen a foul ball listed as a bullet point justifying why someone was worthy of MVP honors.

You won't catch me griping about a card with two catchers on it! One of the first baseball books I ever read as a kid was about Roy Campanella so I've always liked him.