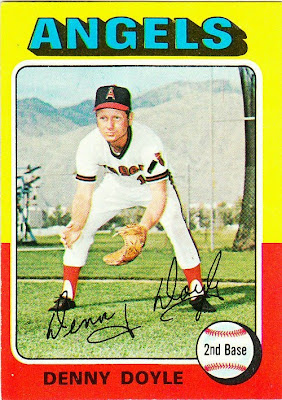 What I thought about this card then: Never came across it. However, Denny Doyle was mentioned quite a bit during my childhood. We thought he was kind of goofy-looking. My brother, especially, did. And that was strange, because Doyle was on the Red Sox at the time and the Red Sox are his favorite team. But anyone and anything was fair game for my brother.

What I think about this card now: That's a nice mountain view. Also, I like Doyle's signature.

Other stuff: Like I said, I knew Doyle as a Red Sox second baseman. He was a pivotal part of the Red Sox's pennant drive in 1975. It's strange for me to see Doyle as an Angel or a Phillie, the teams he played on before coming to the Red Sox.

Doyle's career was rather short, lasting from 1970-78. When he was replaced at second base by Jerry Remy in 1978, he retired at age 35. He was known as a good fielder, but an average or even below average hitter. Doyle and his brothers have operated a very successful baseball academy for the last three decades. 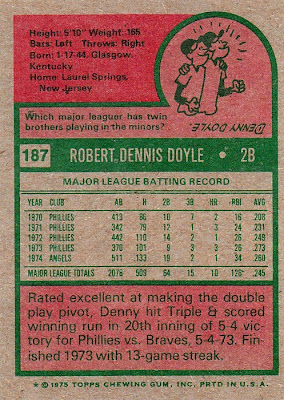 Back facts: Doyle's younger twin brothers are Blake and Brian Doyle. Blake played nine years in the minors. Brian made a big impact in his first year with the Yankees during the 1978 World Series against the (*ahem*) Dodgers. I thought it was a fiendish plot that this guy I never heard of would get big hits against my team. Just more evidence that the Yankees were the devil. Fortunately, he was out of the majors by 1982.

Other blog stuff: Yellow-red just moved into third place with this card. If you include the all-star cards we have come across so far, yellow-red actually holds the lead with 19 cards.
Posted by night owl at 2:32 AM

That's a nice spring training shot. I think that was taken at Tempe Diablo Stadium.

Have any other players been the answer to a trivia question on their own card? I've been following along, but my memory gets hazy the closer I get to my next birthday.

There's been three others that I can tell:

Cecil Upshaw is also mentioned in his cartoon at #92.