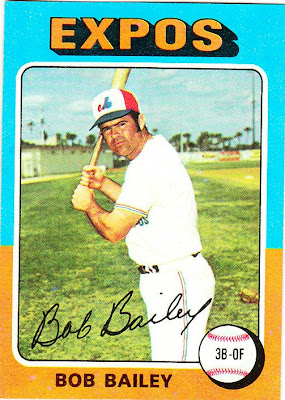 Card fact: This is the first player to feature the "3B-OF" designation on his card. It's not a super-rare position combination. Pete Rose was playing both positions at about the same time. And the current third baseman on my most favorite team could be headed in the same direction next season.

But it was rare enough for me to look through all the previous cards to see if it had shown up yet. The things I do for you people.

What I thought about this card then: I thought Bob Bailey was 53 years old. It turns out he was only 32 at the time of this photo.

What I think about this card now: I believe that might be a Coca-Cola billboard off in the distance. The Coke ads like to appear in the Expos cards.

Other stuff: Bailey was a bonus baby, signed for a heap of cash out of high school by the Pirates. He became known as a decent hitter with power but not much of a fielder. After a few quality years for the Pirates, he was traded to the Dodgers in the deal that sent Maury Wills to Pittsburgh. Bailey proceeded to hit .227 in back-to-back seasons with the Dodgers (73 hits in 322 at-bats each year). The expansion Expos then purchased Bailey.

With Montreal, Bailey enjoyed his best seasons, become a regular power hitter for the Expos. By the time his career ended in 1977, he held several franchise records for the Expos. He later went into coaching. 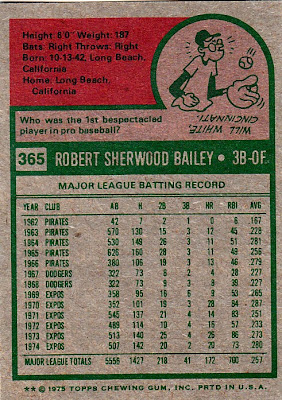 Back facts: Will White was a pitcher between 1877-1886. He had some interesting won-loss records. His nickname was "Whoop-La." I don't know what that has to do with glasses either.

Other blog stuff: On this date in 1990, Darryl Strawberry signed with the Dodgers, beginning a very uncomfortable three-year period for this Dodgers fan.
Posted by night owl at 12:50 AM

I don't think Sandy Koufax could have done much with that 1880 Cincy squad that Whoop-La went 18-42 for.

Blondie Purcell was their best player. Too bad they didn't have 7 more of them. Too bad Blondie liked to tipple.

What's up with the power outagae when he got to L.A. Was he injured or something?

Bailey's lack of power in '67 and '68 could be due to Dodger Stadium. The Dodgers moved home plate ten feet closer to the center field fence in 1969, after Bailey had moved to Montreal. Before 1969, the fence at straight-away center field was 410 feet from home plate. Now it's 400 feet.

It was a trade-off for pitchers. The park yielded more home runs after the change, but there was also more foul territory behind home plate (at least until more seats were added in the 2000s).

Then Straw signed with the Giants the next year, making it uncomfortable for me. I was interviewed by some schmoe news guy about it, and I was so negative I made the 10 o'clock news.