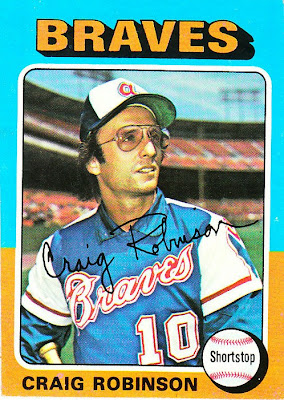 Card fact: This is the last Topps card of Craig Robinson issued during his career. He only had two -- '74 and '75.

What I thought about this card then: I had the mini card. I thought he looked strange. I know it was because of those glasses.

What I think about this card now: That's an awfully regal pose for someone wearing those glasses and that uniform get-up.

Other stuff: Robinson was a backup infielder for the Phillies, Braves and Giants between 1972-77. He enjoyed one year of full-time duty, which was the primary reason why he received a card in this set. He played in 145 games and batted 504 times for the '74 Atlanta Braves. But he hit only .230.

The following year, he endured a season in which he hit a combined .065 for two teams. Topps must've thought "enough of that" and stopped issuing cards of him, even though he career lasted through the 1977 season. 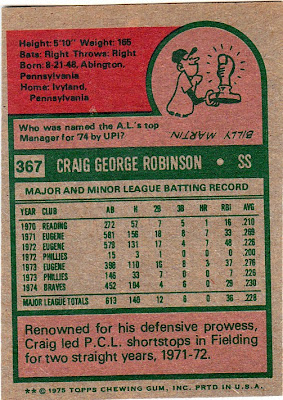 Back facts: This cartoon always confused me. Why is Billy Martin receiving a trophy of a giant thumb? Is it because he got thrown out of a lot of games? I'm guessing that's it, but I'm sure it stumped a few people.

UPI, by the way, is United Press International. It used to be as big a deal as the Associated Press. It ain't anymore.

Other blog stuff: This is the third "blue-orange" bordered card in the last five cards. These color combinations tend to come in clumps. I'm not familiar enough with 1970s printing habits to know why that is, but I'd sure like an answer if anyone knows.
Posted by night owl at 2:35 AM

I would think a more appropriate digit for the Martin cartoon would be the middle finger, like the one he displayed on his '72 card.

i'm guessing it's either a 'thumbs up' for a job well done or a 'you're number 1' index finger. it looks more like a big toe to me, though.

I had Robinson's '74 Traded card. My old baseball card collection is in a box in the back of a closet, and I probably still have it somewhere in that box.

I remember that I found the card somewhere ripped in two, and I glued the two halves back together. I don't remember where I found it, probably on the ground during recess at school or something like that. There was obviously a major crease where the tear was, but it looked relatively presentable. The card had been ripped at an angle where the two halves could be re-attached by putting glue on the inner cardboard rather than the outside of the card.

Why did I go to such great lengths to salvage this card, and why do I still remember it today? When I found the card, it was probably in the very late '70s or maybe even the very early '80s (I bought my first cards in '78, and really began collecting in earnest in '79). I just didn't come across many '74 cards. On top of that, it was from the mysterious Traded set, which Topps had done a couple of times a few years before I got into baseball cards, but hadn't done since. This was likely one of the first '74 cards I ever had, and was probably my very first '74 Traded card. I probably hadn't even seen very many '74 Traded cards before that, although ISTR that I would occasionally encounter a '76 Traded.

Yup, Steve, I know. I'm only counting the cards in the main set.

That picture looks like one of those pictures you can get taken where they put you on the cover of SI...a chance to look like a Major League when everyone knows you're not.

I think Robinson is the only player I can think of with 500 AB and more triples than doubles (4 doubles out of 500 AB). This guy also get the Bob Didier award for having absoulutely no power for the duration of his career. It seems the Braves had compensate for having Aaron, Cepeda, Evans, D. Johnson, Carty with players who probably never reached the warning track on a fly ball.