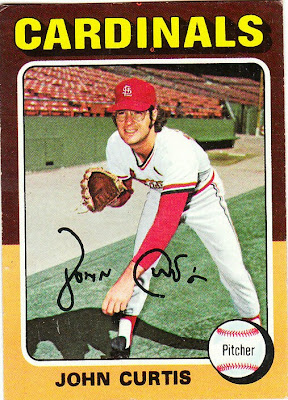 Card fact: This is John Curtis' card debut in a Cardinals uniform. But it's not his first card featured as a Cardinal. He is in the 1974 Topps Traded set. It's a particularly gruesome hatless photograph of him.

What I thought about this card then: I had the mini card. Most of the minis I pulled came early in 1975, and Curtis was one of the first Cardinals I ever saw on a card. He represented the Cardinals for me at that stage. That must have explained why I didn't think much of the team then. If only Lou Brock or Bob Gibson had been my first Cardinal card.

What I think about this card now: Interesting signature.

Other stuff: Curtis was a much-traveled left-handed pitcher who bounced between starting and relieving for the Red Sox, Cardinals, Giants, Padres and Angels. He lasted 15 seasons, compiling an 89-97 record. Much of his starting came during his earlier years with the Red Sox and the Cardinals, and during the 1980 season with San Diego when he enjoyed one of his best years.

After his career, Curtis pursued his interest in writing, providing freelance stories for various publications, including Sports Illustrated and the Boston Globe. He also coached in an independent baseball league. 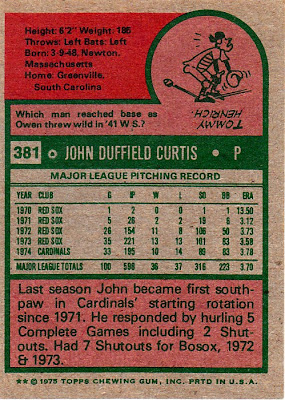 Back facts: OK, I guess the Dodger fan is going to have to correct the cartoon here.

The cartoon addresses the famous gaffe by Dodgers catcher Mickey Owen against the Yankees in the 1941 World Series. Tommy Henrich advanced to first base on a third strike after the ball got past Owen.

But note that the cartoon says "Owen" (no first name) "threw wild," implying that Owen was the pitcher and he threw a wild pitch. Well, that's all kinds of screwed up. Hugh Casey was the one who threw the pitch, and I don't believe it was wild. It's just that Owen missed it, Henrich reached first base, the Yankees rallied to win Game 4, and won the Series.

Other blog stuff: Dodgers announcer Vin Scully was born on this date 83 years ago. No, he wasn't on the job yet for Owen's dropped third strike.
Posted by night owl at 1:29 AM

I didn't know anything about the '41 WS incident, but their cartoon did nothing to help clear it up. Thanks for that. After the great color scheme on the Bando card, this one is sort of blech. Maybe it would be better if it were Gibson or Brock...