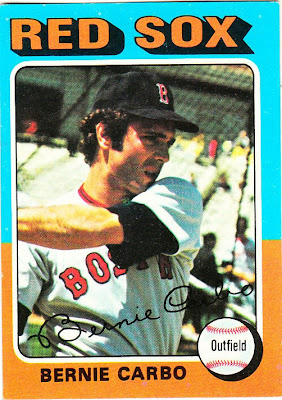 Card fact: This is Bernie Carbo's first card in a Red Sox uniform. I don't count that horrid attempt by Topps to airbrush him into a Boston uniform in the '74 set. Just a brutal card.

What I thought about this card then: It was a personal favorite. I loved the batting cage action. I wrote about it once here. It reminds me of playing ball in the backyard.

What I think about this card now: Still a great card. I wonder if that is the press box in the top left corner.

Other stuff: Carbo was kind of a wild-and-crazy guy who started with the Reds, playing in the 1970 World Series and finishing second in the Rookie of the Year voting. He then moved on to the Cardinals and then the Red Sox. While with Boston, he hit one of the most famous pinch-hit home runs in World Series history in 1975, delivering a three-run home run in the eighth inning to tie the game at 6-6 against the Reds in Game 6. Boston would later win on Carlton Fisk's home run in the 12th.

Carbo later confessed to taking drugs during the '75 World Series. His behavior (he hung around a lot with Bill Lee) helped get him traded to Milwaukee in the George Scott-Cecil Cooper deal. He later returned to Boston, but didn't stick around for long, bouncing between the Indians, Cardinals and Pirates.

Drug problems plagued him after his career, but he has been sober for more than 15 years. He worked as a hairstylist, but now runs a religious ministry and works in Red Sox alumni relations. 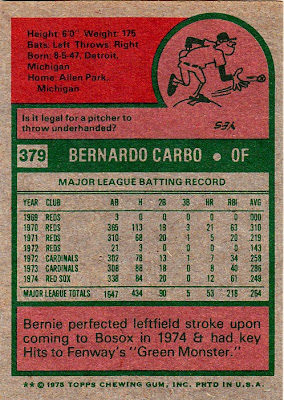 Back facts: I'd love to see someone try a true underhanded pitch.

I'd settle for seeing another eephus pitch. That's the way I like it.

This was one of a handful of cards I just couldn't get back in 1975. I missed collecting the set back then by about 15 cards.