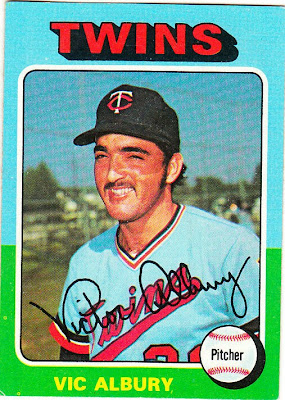 Card fact: This is Vic Albury's rookie card. He only had three Topps cards. He didn't even have a traded card.

What I thought about this card then: This is another one of these guys that I had no clue existed until I went about completing the set six years ago. We are really in the midst of a run of 1970s nobodies the last few cards.

What I think about this card now: Albury looks like he's up to something.

Other stuff: Vic Albury pitched for four seasons with the Twins between 1973 and 1976. His best season was 1974 when he went 8-9 for the Twins, starting 22 games and pitching 164 innings. After his playing time decreased in 1976, he bounced around in the minors in the Yankees and Indians organizations through 1979. 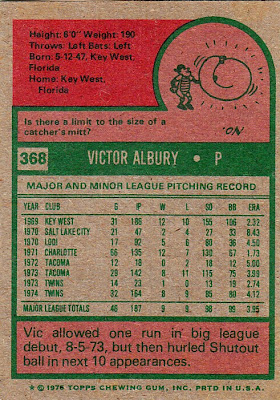 Back facts: I don't know where Topps received its information, but according to the baseball rule book, under Objectives of the Game, 1.12, "The catcher may wear a leather mitt not more than 38 inches in circumference, nor more than 15 1/2 inches from top to bottom." There are also limits for the space between the thumb and the rest of the fingers, and the webbing. That seems to contradict what the cartoon is saying.

Also, I started to go through the 1973 Twins season to see how many of those 10 shutout appearances were relief outings (I'm sure all of them were). But I got distracted by the attendance figures for Twins games. Mercy. They were awful. Nobody went to games in the early '70s, did they?

Other blog stuff: On this date in 1981, rookie Fernando Valenzuela beat out Tom Seaver to win the N.L. Cy Young Award.
Posted by night owl at 2:16 AM

Congrats to Fernando...that was quite a feat.

That look on his face must be because he knew that catcher's mitt was way too big.

That color combination actually matches that background quite nicely.

if he's a nobody,what's that make you,how many card's are you on

I was using "nobodies" in terms of comparison with his fellow ballplayers of that era. It's a subjective term but also a common term used by many people who collect or are fans of the game or report or broadcast the game. I've even heard players use it. It's nothing to get defensive over.

I've been on a couple of cards. Thanks for asking.