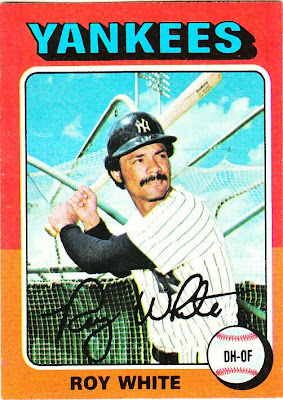 Card fact: This was one of four 1975 cards that were the first cards I purchased from a mail-order catalog, which happened on two separate occasions. The first two were George Brett's rookie card and Barry Foote. The second two were Roy White and Ralph Garr.

What I thought about this card then: Out of the four cards that I ordered, this was the only one that I had not seen. But White was one of my favorite players, and I knew I had to have the card. When I received it, the mustache surprised me. I didn't know that White had a mustache, as he had shaved it off by the late 1970s.

Other stuff: One of the drawbacks of having two blog is that if I write about the player already on one blog, I don't feel like writing about him again on the other blog. I did a post about White recently on Night Owl Cards.

So, the abbreviated version of that post is White was a lifetime Yankee, yet he was one of my favorites as a kid, and I nicknamed myself "Roy" when I played baseball in the backyard (although I selected the name long before I had heard of Roy White). Later, White stood out as one of the quiet, non-brash Yankees that I appreciated.

A switch-hitter, White played 15 seasons for the Yankees. He was an All-Star in 1969 and 1970, knew how to take a walk, and hit a very quiet 160 home runs in his career. After the majors, he played in Japan. Later he was a coach for the Yankees and A's. 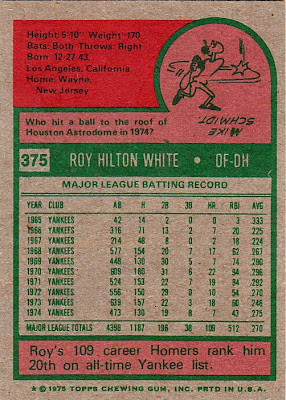 Back facts: Mike Schmidt's hit in the Astrodome came on June 10, 1974. The ball actually hit a speaker 117 feet above the playing surface and 329 feet away. The ball then fell to the field. According to Astrodome ground rules, it was a live ball. Schmidt had thought it was a home run and was in his home run trot. So the Astros held him to a single.

Other blog stuff: Actress Jodie Foster was born on this date in 1962. What does she have to do with 1975? Well, until very recently, I thought she played one of the main characters in the '75 Disney movie "Escape to Witch Mountain," which was one of the first non-cartoon movies I ever saw. But it turns out Foster never acted in the movie. The part was intended for her, but she had a conflict, and Kim Richards took the role.

Another childhood memory debunked.
Posted by night owl at 1:53 AM

Just for grins I looked to see where Roy ended on the Yankees all-time homer list. He is in 25th place with 160 homers. The closest active Yankees are Robinson Cano with 116 (32nd on the list) and Mark Teixeira with 72 (49th on the list).

PATP...Thanks for looking that up. I was going to do it but I'm too lazy. I think I'd be quite proud to say that only 24 people who have walked this earth have more homeruns than me for a very storied baseball club, even if it is the Yankees.

Read more about White's career, including interviews with him, in "The Lean Years of the Yankees 1965-1975", a book written by my former colleague, Bob Cohen.

This card was in the first pack of baseball cards I ever had. I was 8 years old in the summer of '75 when my mother brought me a pack of cards from the store. I looked at the "DH-OF" inside the baseball on the front of the card and asked my father what a "die-off" was.