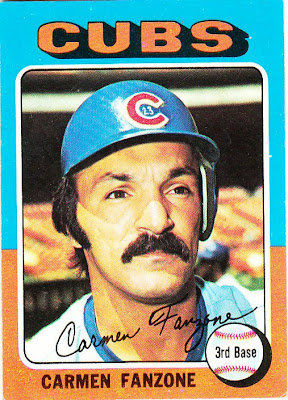 Card fact: This is the last Topps card of Carmen Fanzone issued during his career. He had only three.

What I thought about this card then: Never saw it. This was one of those players who was absolutely not in my consciousness until I returned to the hobby and started to collect the entire 1975 set in 2004.

Also, I'm wondering how you pronounce his name. Is it "Fan-ZONE" like "the ESPN fan zone" or is it a more ethnic pronunciation? Please tell me it has nothing to do with ESPN.

Other stuff: Fanzone was a utility player, mostly for the Cubs, for five seasons. He was rather popular, which strikes me as a strictly Cub-fan thing. They seem to gravitate toward the mediocre players. But Fanzone was very good at playing a variety of positions, and did have one semi-decent year in 1973.

His popularity seemed to come from his ability to play the horn. He played the National Anthem before Cubs games and went into the jazz music profession after his career ended. He is married to a Grammy-winning jazz vocalist. 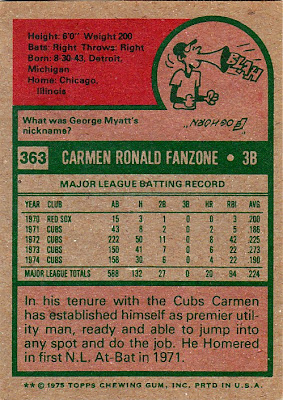 Also, I enjoy write-ups like this in which the writer is desperately trying to avoid mentioning the player's drawbacks. Fanzone is "ready and able to jump into any spot and do the job." That is, as long as you don't ask him to hit more than .224 for his career.

Other blog stuff: On this date in 1974, Mike Marshall became the first relief pitcher to receive the Cy Young Award.
Posted by night owl at 2:04 AM

I got Fanzone's autograph at Wrigley Field when I was 10 year old. He instantly became my all-time favorite Cub.....Of course Cubs fans gravitate to the mediocre players; that's all we've got!....and his name is pronounced "FAN-zone".

what?!?!? absolutely no mention of his career after baseball?

Whenever I see Carmen Fanzone's baseball card, I immediately am reminded of Jimmy Baio's character Carmen Ronzonni from the Bad News Bears in Breaking Training.

Homered in his first at bat for the Cubs? They must have thought they had a new power hitter. Alas, it didn't work out that way. I think my favorite wiki fact is the last one...where the police chief was named after him in the Transformers Animated show.