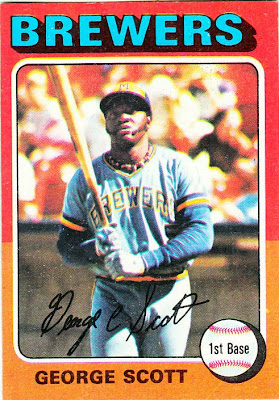 Card fact: All of you people who think Chris Berman was the first person to be nicknamed "Boomer"? George Scott is going to come to your house and do some deck work on your ass.

Scott was the original "Boomer." At least to me.

What I thought about this card then: I didn't see it. But if I did, I would think it was smashing. Action cards didn't come around very often. So it's great, even if Scott isn't moving very much here.

What I think about this card now: This is the first time we get to see Scott's necklace of shells featured on a baseball card. He claimed it was strung with second basemen's teeth.

Other stuff: Scott came up with the Red Sox, which I didn't know as a kid. I knew him as a Brewer, and when the Red Sox acquired him in the trade that sent Cecil Cooper to Milwaukee, I thought it was a novel thing -- Scott in a Red Sox uniform. It turns out that Scott was picking up where he left off, mashing taters over the Green Monster.

I'm not sure why Scott was dealt away to Milwaukee in the first place. It came in a giant 11-player deal in 1971. The Brewers got the better end of the deal as Scott went on to lead the league in home runs in 1975. Scott was also a terrific fielder, winning the Gold Glove Award eight times. He named his glove "black beauty."

I've mentioned Scott a couple of times on the other blog, so I'll stop here. 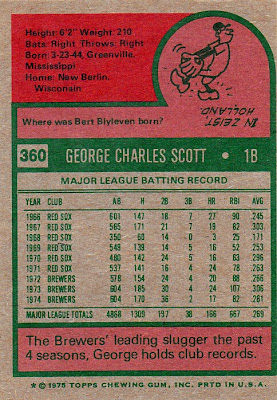 Back facts: Topps is playing coy with the write-up. It's telling you that Scott "holds club records." But that's as far as it's going to go.

Other blog stuff: Dwight Evans, the guy who seems to be on the last card needed by '70s set collectors everywhere, celebrates his 59th birthday today.
Posted by night owl at 12:55 AM

George Scott is the only Boomer

You just had to go and ruin a great post by mentioning CB. Can't we just ship him and Joe Morgan off to some remote land. Back to Scott, that is a great card. I think he's threatening his bat..."you better hit it good bat!!"

Not to go all '70s on you guys, but these have to be about the best muttonchops of the set.

I like that he signed his name George C. Scott, it made me laugh.

George Scott reminds me of the Complete Handbook of Baseball series of books in the 70's and 80's. I don't if anyone had one. For those who didn't it was season preview paperback with player profiles completed in a series of short phases... The most memorable phase for me was for George Scott. It went..."Just a big puppy dog who wants to be loved"... I always liked that description of him. Sometimes I use it for myself.

This is another of the very few 75's that I actually had in75. I turned 6 that summer and had no more than 4 or 5 packs total. I LOVED this card. Boomer looked like a bad dude, even though I'm sure I had no proper reference of bad-dudeness then.