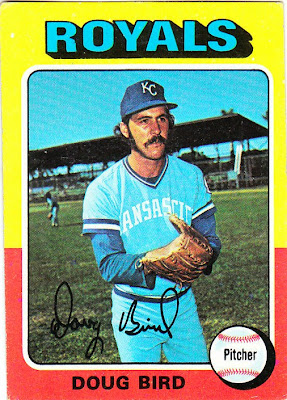 What I thought about this card then: This is another player that shares his first name with my brother. But I don't think my brother was too fond of Doug Bird. I know we thought the guy's last name was funny.

What I think about this card now: If Bird wasn't wearing the baseball duds, he'd look like he stepped off the set of Little House on the Prairie.

Other stuff: Bird was a consistent reliever for the Royals during their rise to prominence. He relieved for them in the 1976, 77 and 78 A.L. Championship Series against the Yankees. But Bird also worked as a starter. In 1976, he started 27 games, then went back to full-time relieving in 1978.

Bird was later traded to the Phillies, and then he signed with the Yankees as a free agent. The Yankees proceeded to trade him to the Cubs. With Chicago, Bird was used mostly as a starter. Bird ended his career in 1984 with the Red Sox. 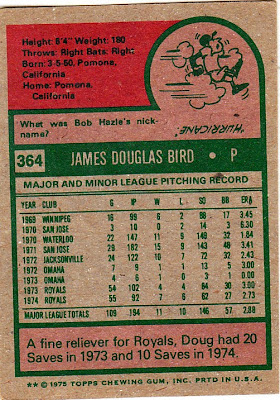 Back facts: The 30 saves that Bird compiled in his first two years in the major leagues amounted to half of his total for his career, which last 11 years. He saved 60 games overall.

Other blog stuff: On this date in 1973, New Jersey became the first state to allow girls to play Little League baseball.
Posted by night owl at 1:27 AM

It looks like he's pitching at the Little Stadium on the Prairie.

How progressive of New Jersey.

This may be the best example in the set of how sky blue uniforms back then really were.