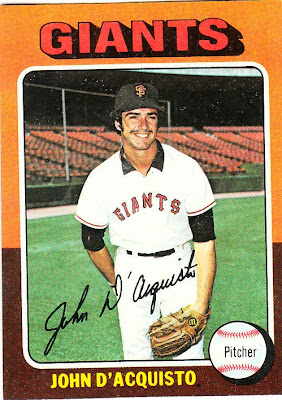 What I thought about this card then: This is one of the first cards I ever pulled from a pack, so it's got a special place in my collecting heart. Even if it is a Giant.

What I think about this card now: A pretty lame pose there by John.

Other stuff: D'Acquisto started off quickly for the Giants in 1974. He went 12-14 and led the team in strikeouts with 167 in 215 innings. He was named to the Topps All-rookie team (but did not receive a trophy on his card). But D'Acquisto had a disastrous sophomore year and eventually was dealt to the Cardinals in the offseason of '76. St. Louis had him for a couple of months before trading him to San Diego. With the Padres, he remade himself into a reliable relief pitcher. He stayed with the Padres through the rest of the '70s. Then he ended his career with the Expos, Angels and A's.

After his career he became an investment banker but was involved in a fraud case and sentenced to prison for 63 months in 1996. Later it was determined that he was set-up by others in a much bigger scam. Those people were then sent to prison and D'Acquisto was released in 2002. Virtually all of the counts against him were dropped. 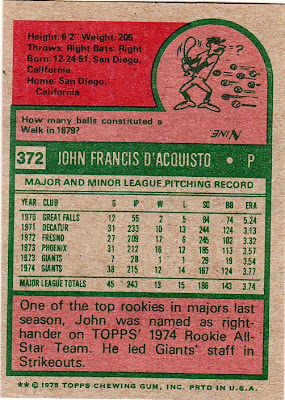 Back facts: This cartoon has been stuck in my brain since I was 9. But I'm quite certain that I didn't even know what a walk was when I was 9.

Other blog stuff: Here is the card that I pulled out one of those first three packs that I bought in 1975: 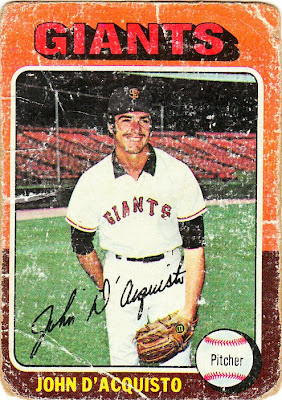 That is a well traveled card.

I am astounded that it was 9 balls for a walk. Was there a 100 way tie for first in walks with zero back then?

Behind John was the smallest backstop screen in baseball. Giants season tickets came with dental insurance.