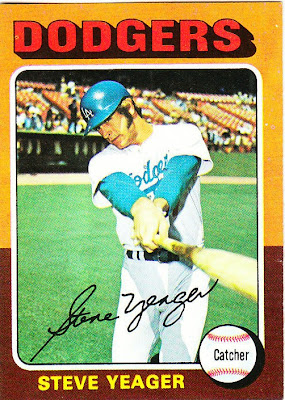 Card fact: Feast your eyes on the first Dodger card I ever pulled from a pack that I purchased with my own allowance.

What I thought about this card then: Well, it was just about the coolest card on the planet for a couple of months. I distinctly remember standing in the middle of the playground at school (our school had a very expansive playground area), staring at my Steve Yeager card. I took my cards to school quite often in 4th, 5th and 6th grade.

What I think about this card now: Yet another orange-brown bordered Dodger card. Humph.

Also, check out those sideburns.

Other stuff: As much as I liked this card, Yeager was a constant thorn in my Dodger-rooting side as a kid. He couldn't hit, and he always batted eighth in the order. I don't know how many rallies I saw die because he came up to bat.

Yet, I was fiercely proud of Yeager when his injury led to the invention of that flap that hung from the chin of a catcher's mask to protect a catcher from getting struck in the throat. The flap came about after Yeager was hit in the throat by a broken bat from teammate Bill Russell, piercing his esophagus. Yeager was standing in the batting circle at the time, and he had nine pieces of wood taken out of his neck. Trainer Bill Buhler later made the flap that covered the neck. Now, catcher's masks are created so the helmet comes down to protect the neck area.

Yeager was a good defensive catcher with a terrific throwing arm. And he was the best indication that I had that the Dodgers were going to win the World Series against the Yankees in 1981. The light-hitting Yeager hit two home runs in that series and the Dodgers won 4 games to 2.

Yeager is known for a variety of non-baseball things among Dodger fans. He is the nephew of famed pilot Chuck Yeager. He had a small part in the Major League movies. He once posed for Playgirl. I always thought he was trying to look like Michael Caine.

He later became a coach in the Dodgers' organization. 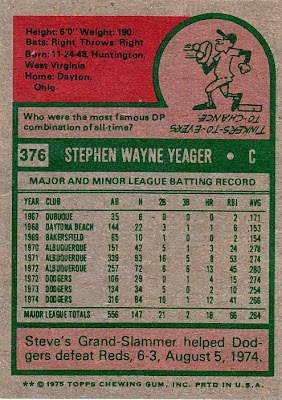 Back facts: I believe my first knowledge of what a grand slam was came from this card.

Other blog stuff: Here is the first Dodger card I pulled in 1975: 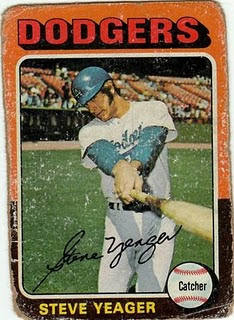 That is the finest piece of history I'll ever own.
Posted by night owl at 3:18 AM

I remember Yeager's world series heroics got him to be a guest star on the Mandrell Sisters' variety show.

Steve was part of a lawsuit in the 1990's as a result of being the spokesman for Collectibles International.

Essentially, the company ran advertisements in the LA Times everyday telling people that you could have a lucrative career as a sports card broker (similar to a stock trader) and all you needed to do was pay some money upfront for training.

Unfortunately for Steve, some people lost their shirts because thing didn't pan out for them and they decided to sue the pitchman (as well as the owner) because Yeager added legitimacy to the advertisement.

I wish I had the first Ranger card I ever pulled. Pure greatness.