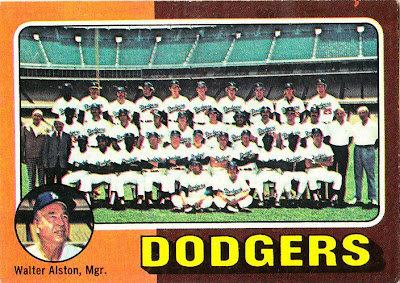 Card fact: This is the 15th card in the set to feature the "brown-orange" color combination (not to be confused with the "orange-brown" combination). Out of those 15 cards, three have been Dodgers. So, the Dodgers represent one-fifth of the cards with this color combination, which suspiciously resembles the Giants' color combination. I am not putting it past Topps to pull something sneaky like this even way back in 1975.

What I thought about this card then: Naturally, I thought it was cool to see all of the Dodgers in one place. It was the one team card that meant something to me.

What I think about this card now: It is sad to see Walter Alston relegated to a tiny circle on the team card. Up until this point, Alston had received his own card in most of the sets since he became manager (his '62 Topps card is terrific, I have to feature it one day). I didn't know that when I was collecting in '75. Otherwise I would've been disappointed. Manager cards rule!

Other stuff: The Dodgers were coming off their first pennant victory and World Series appearance since 1966. After four straight seasons of finishing in second place in the N.L. West, L.A. had finally placed first and beaten Pittsburgh in the NLCS. They would go on to lose to Oakland in the World Series. Back facts: This is a successful, veteran team so there wasn't a lot of trading or airbrushing going on with the Dodgers. But Jim Brewer, Willie Crawford and Don Sutton are the only connections (besides Alston) between the 1966 N.L. champs and the 1974 N.L. champs.

Other blog stuff: Time to figure out how well Topps represented the National League champs of 1974. Normally this gets a little tedious. But this one is going to be fun for me.

The Dodgers used just 35 players in 1974. That is tied for the second-least among the teams featured so far. Topps didn't leave out anyone big from the previous year. In fact, out of the players left out of the set, the one with the most at-bats had a whopping 18.

The player that didn't get a card who I found the most interesting is Charlie Manuel, the current Phillies manager. He played in four games for the 1974 Dodgers.

So, Topps featured 26 of the 35 players, which is pretty darn good. Here is where the Dodgers rank in comparison to other teams reviewed so far:


Third place. I'm quite happy about that.
Posted by night owl at 1:14 AM

Sorry, I always find that irritating...but I thought it would be funny. I was wrong.

I like the team cards from this set, but you are right, Walt deserved his own card.

Is it just me or is the appearance of the ranking messed up? The Dodgers and Giants are on the same line as the Orioles.

I think I fixed it. Something weird has been going on with Blogger as far as copy-and-pasting the last couple of days.

The rankings show up OK now on my computer. Hopefully they do on everyone else's.

The Dodgers and the Giants were on the same line for a while? Eeeew. I'm glad that bit of ugliness was fixed before I saw this entry. ;)


why is this brown-orange instead of orange-brown? It's a horizontal card with a horizontal back, what's your deciding factor?

If you look at all the team cards and tilt them counterclockwise 90 degrees, so that they are vertical, the color combinations are the same as previously established color combinations -- tan/light blue, brown/tan, orange/yellow, etc. Tilting the Dodgers team card in this fashion would produce a "brown-orange" card.

However, if you tilted the team cards clockwise 90 degrees to make the card horizontal, you would come up with color combinations that don't exist with the rest of the set, such as light blue/tan and yellow/orange. Only orange/brown would be consistent with the other color combinations.

That leaves me to believe that in the printing process the team cards were oriented with the right side of the card on top, which would mean the brown side is on top and the orange side on the bottom, therefore a "brown-orange" card instead of "orange-brown."

Yes, I fill my brain with pointless stuff. But you asked.