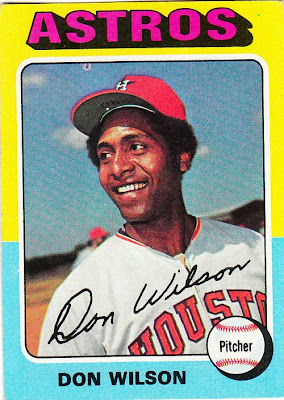 Card fact: One of the more unfortunate cards in Topps' history. Don Wilson died in January of 1975, after Topps' cards went to print. If there was an attempt to pull the card from the set, it didn't succeed.

What I think about this card now: It's just sad. I look at it, and all I can think of is *sadness*

Other stuff: Wilson was probably the Astros' first great pitcher. He had tremendous stuff, but it took him awhile to harness it. He enjoyed some terrific games, striking out 18 in a game once and throwing two no-hitters. Wilson struck out 235 batters in 1969, the same season in which he led the league with 16 wild pitches.

Wilson pitched all nine of his major league seasons for Houston and won in double figures in all but one of them. He was an All-Star in 1971, possibly his best season.

Wilson died at age 29 on Jan. 5, 1975. He was found in the passenger seat of his vehicle in the closed garage of his home with the car's engine running. The garage was attached to the house and Wilson's son also died in the incident. His wife and daughter were hospitalized. The cause of death was listed as accidental. 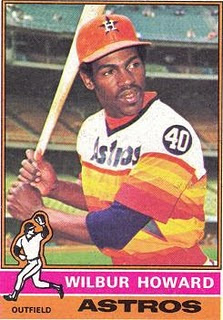 Wilson's number was also retired in April of 1975. 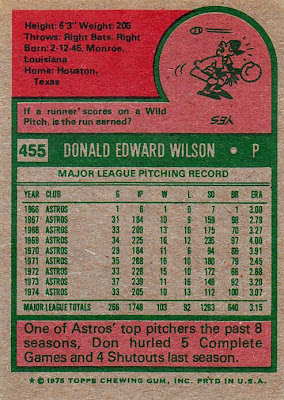 Back facts: It's a little rare to see a player's complete stats from the start of a career to the end of a career on a baseball card, but that's what we have here.

Other blog stuff: I missed posting on Wilson's birthdate by four days. But the dream isn't over yet.
Posted by night owl at 2:28 AM

The Astros really seemed to deal with a lot of tragedy in their early years: Wilson, Jim Umbricht, J.R. Richard - a surprising number of pitchers getting cut down in their primes.

and JR Richards had a stroke.

I remember reading that Hank Aaron said he had the most trouble with Wilson. Also, he was part of an often overlooked 1969 Astros starting staff that featured THREE 200-strikeout pitchers Wilson, Dierker and Tom Griffin, plus Denny Lemaster who had 173.

Forgive the morbid trivia, but is it correct that three guys in this set ended up passing away as active players? (Wilson, Danny Thompson, and Thurman Munson.)

And I believe that the same total holds true in the '76 and '77 sets, with Lyman Bostock replacing Wilson on the roster.

Given the circumstances, I think a lot of people wondered if Wilson's death may have been suicide, though it obviously could not be proven.

Unfortunately, I think there may be a fourth player in this set who died while an active player -- Danny Frisella?

Yes, and Frisella was another one who got a card after his death. He died in January of '77 and had a card in the '77 set.

By the way, my comments here are in lieu of a post tonight. I forgot to scan the back of the next card. I'll have the post up during daylight hours tomorrow.

Another guy who passed away while active had a card in the '77 set. Danny Thomas had a rookie card that year with the Brewers and a couple years later while playing in an independent league killed himself.

The card started the sadness and the comment thread just continued it.