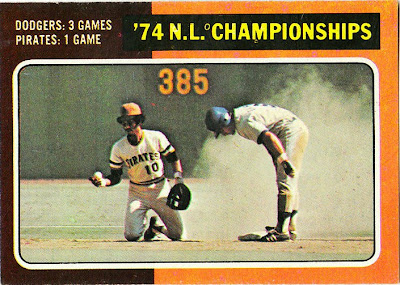 Card fact: That is Pittsburgh's Frank Taveras in the photo. I'm reasonably sure the other guy is Steve Garvey, but it's kind of hard to tell.

What I thought about this card then: You have no idea how awesome I thought this card was in 1975. Think of it: I loved action cards, because they were so rare then. I loved moment-in-time cards (I still do). I loved cards of Dodgers doing well. Add it all together and this quite possibly was the card that I was most impressed with in the entire set.

What I think about this card now: The dust rising from second base is terrific.

Other stuff: If that is indeed Garvey, then this is a play from the third inning of Game 1 of the 1974 N.L. Championship Series. Garvey hit a one-out double off of Jerry Reuss at Three Rivers Stadium. He was stranded there, but the Dodgers won the game 3-0. 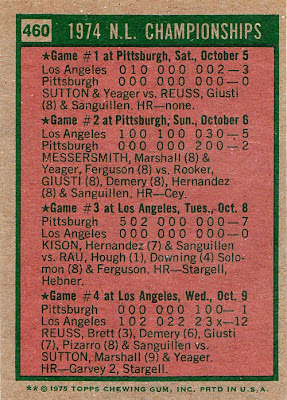 Back facts: The Dodgers were almost as impressive with their pitching in this series as the A's were in their championship series. Don Sutton threw a four-hit shutout in Game 1, then allowed just three hits in Game 4. Andy Messersmith did pretty good in Game 2, too. Only a blow-up by Doug Rau in Game 3 mucked things up.

Other blog stuff: If you're a team collector, would you put this card in your binder if you rooted for the Dodgers or Pirates? Right now, this card is in my team binder, but I don't know if it would be if the Pirates were my favorite team.
Posted by night owl at 2:23 AM

Awesome card. I have one in my Dodger binder and one in my Garvey binder.

Great shot. That's a great "moment in time" photo. The border colors are great too. With the Pirates uni and all the dust, the orange-brown is perfect.

I concur. The dust cloud is awesome, especially for the era when posed carss were the norm.