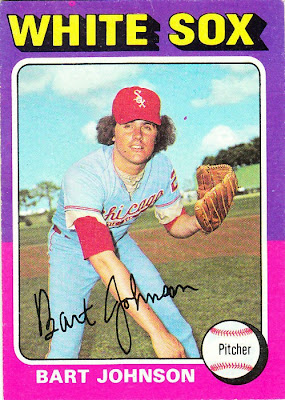 Card fact: This card is in the top five of the cards that we made fun of the most as kids in 1975. Bart Johnson is right up there with Bruce Ellingsen and Gene Locklear.

What I thought about this card then: It horrified me. I believe it was the combination of Johnson's overgrown curly hair and his name, "Bart," that made me never want to have the card. My brother owned it, and I was so happy he was stuck with it.

What I think about this card now: It's not as bad as I thought then. It's fairly apparent that Johnson is bad-ass. His 1974 Topps card is awesome.

Other stuff: Johnson was a very talented athlete, who played basketball in college and was recruited by John Wooden. He selected baseball over basketball because he said his chances of making an impact in the pros was better in baseball.

Johnson possessed a terrific fastball, but he enjoyed only limited success on the mound. Injuries were a bit of a problem. An offseason basketball injury had him playing the outfield early in his career. But he returned to pitching and was both a starter and a reliever. He was at the height of his success in 1974, winning 10 games.

Johnson was kind of an outspoken character. When the White Sox wanted to send him down early in 1974, he threatened to retire and try out for the NBA's Seattle SuperSonics.

After his career, Johnson became a longtime scout for the White Sox. 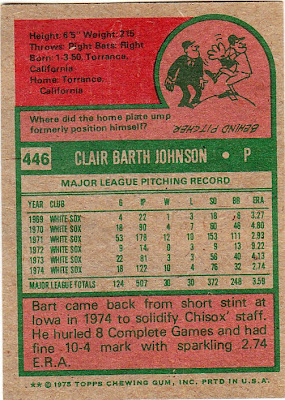 Other blog stuff: On this date in 1975, the Number 1 song in the country was "Fire" by the Ohio Players. They were the ones who featured lovely ladies on their album covers, covered in whipped cream or honey or something. I don't know. I was 9.
Posted by night owl at 3:21 AM

Bart was my first favorite player. To this day he is probably #1 or #2 of my favorite Sox players (along with Mike Squires).

Ok, bad-ass or not, Clair has to be in the running for worst first name ever for a major leaguer. Also, how unstable would it be to see the ump standing behind the pitcher now? Maybe that's what happened on Manny's 2008 Stadium Club card!

Ok, I'll get caught up on some more later Night Owl.