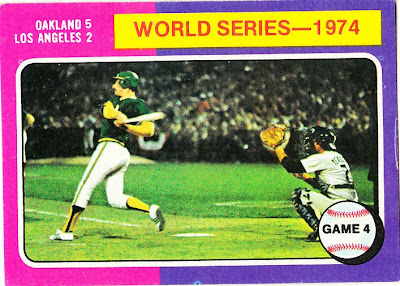 Card fact: I believe this is a photo of A's starting pitcher Ken Holtzman hitting a home run in the third inning of Game 4. It gave the A's a 1-0 lead at the time.

What I thought about this card then: I didn't see it. This bothered me a lot, because I had a great deal of interest in the World Series cards. If I couldn't own the card, at the very least, I wanted to see it. But for a long time, this was the elusive card of the World Series subset.

What I think about this card now: It looks like Andy Messersmith got the pitch too high.

Other stuff: Even though Holtzman hit that home run, the Dodgers came back to hold a 2-1 lead on Bill Russell's two-run triple in the fourth inning. It stayed that way until things fell apart in the sixth for the Dodgers.

Messersmith walked Bill North to start the inning. He then threw wildly to first on a pick-off attempt, sending North to second base. Sal Bando, in a Series-long slump, then blooped an opposite-field single to right, scoring North. Messersmith made matters worse by walking Reggie Jackson. Joe Rudi, the No. 5 hitter, laid down a sacrifice bunt to move the runners to second and third. After an intentional walk to Claudell Washington, pinch-hitter Jim Holt knocked a solid single to score the second and third runs of the inning. A groundout scored the fourth run of the inning.

The Dodgers tried to rally in the ninth, placing two runners on base. But Dick Green made a standout lunging dive on a ball hit by Von Joshua, and turned it into a game-ending double play. 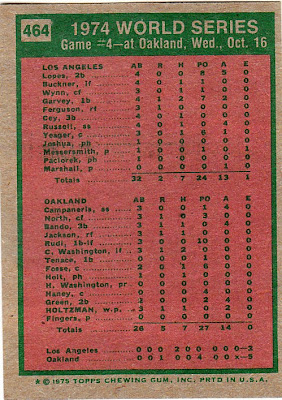 Back facts: This was the only game of the series that did not end with a 3-2 score. In fact, the sixth inning of this game almost matched the total runs in each of the other four games.

Great add Steve. Another great picture, but who's elbow is making a cameo?