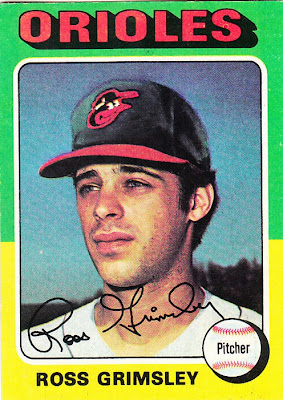 Card fact: Ross Grimsley is airbrushed into an Orioles cap on this card. He was traded from the Reds to the Orioles on Dec. 4, 1973 in a deal that sent Junior Kennedy and Merv Rettenmund to the Reds. The trade worked out pretty well for the Orioles.

What I thought about this card then: I remember think that there was something "off" about this card, but not being able to figure out exactly what it was. I knew nothing about airbrushing and usually airbrushed cards didn't register with me. But this one did.

What I think about this card now: Even though it's an obvious airbrush job, the Orioles bird doesn't look too bad.

Other stuff: Grimsley was another one of those eccentric pitchers of the 1970s. He was known both as "Scuz" and "Crazy Eyes," and wore a giant white man's Afro once he was able to get away from the Reds' strict grooming rules. During the '72 season, he reportedly corresponded with a self-described witch who was sending him good luck charms. Grimsley has some classic baseball cards (specifically 1978, 1980 and 1981 Topps).

Grimsley was a strong, young pitcher for Cincinnati and pitched in four games of the 1972 World Series against the A's. He won 18 games in his first year with Baltimore in '74. He signed as a free agent with Montreal in 1977 and proceeded to win 20 games for the only time in his career in 1978.

Grimsley's career ended quickly after that. He was traded to Cleveland in 1980, and ended his playing career back with Baltimore in 1982. He later became a coach in the minor leagues. 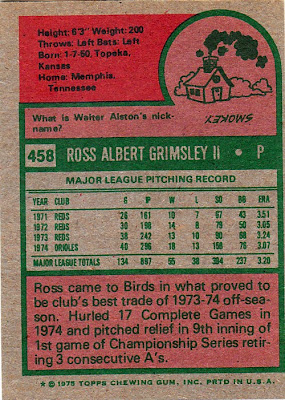 Back facts: Another Dodgers cartoon question.

Other blog stuff: This is the last player card for awhile. We begin another subset tomorrow as we relive the 1974 postseason.
Posted by night owl at 2:55 AM

The book The Baseball Hall of Shame has some info about Grimsley:

He wouldn't wash, comb his hair of use deodorant when he was winning. That's where the nickname Skuz came from. It says he probably could have placed a "G" in front of his first name.

I'm guessing the '78 Expos might have been tempted to throw a couple of games if his funk got to be too much.

Ross' 1976 Topps card freaked me out as a kid. I could tell if his face made me think he was a serial killer or a zombie.

The Topps photographer must have not wanted to be around Grimsley which is why he got the airbrush treatment in 1975.

Topps had already airbrushed an Orioles cap on him on his 1974 Traded card, so they had plenty of time during the 1974 season to get a picture of him with his new team. It wasn't like he was traded late in the 1974 season - he played the entire year with the O's. Topps was either very lazy, or just decided to keep their distance from Scuz.

Great insight into the name Skuz. Gross, but great. Considering he had some good years, he must have been absolutely awful to be around.

I just completed my '75 set so I'm rereading this blog -- great stuff. Ross is pitching coach for Richmond and I see him a couple times a year now. He dislikes this and the 74 Traded card for the lousy airbrush job they did. I have had a hard time finding this card in good shape. Ross is an awesome guy, and he smells just fine as far as I can tell.