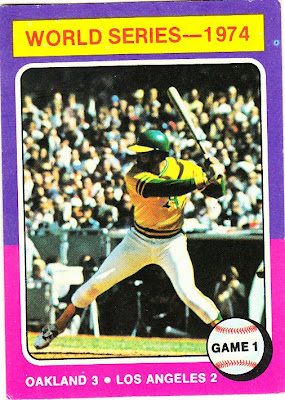 Card fact: That is Reginald Martinez Jackson there in the photo. He's pictured here most likely because he knocked in the first run of the World Series, a home run to left-center field off of Andy Messersmith in the top of the second inning.

What I thought about this card then: I had the mini card. I really should have disliked Jackson because of what he did to the Dodgers, but I was too young to know anything about the '74 World Series. It wasn't until 1977, and when Jackson was with the Yankees, that he became a problem.

What I think about this card now: It's pretty cool. Wish I knew if he is hitting that homer in this photo.

Other stuff: Game 1 set the tone for the rest of the Series. Four out of the five games in the Series were decided by 3-2 scores, and the losing team scored two runs in every game of the series.

Jackson knocked in the first run, but Ken Holtzman played a key part, too. As the starter, he went only four-plus innings (Rollie Fingers came in during the 5th inning and lasted until the 9th. Catfish Hunter got the save!). But Holtzman scored the A's second run when he doubled with one out, went to third on a wild pitch, and came home on Bert Campaneris' sacrifice bunt.

The third A's run proved costly for the Dodgers. In the eighth inning, with Campaneris on second and one out, Ron Cey (ouch) threw errantly to first on a ground ball by Sal Bando and Campaneris scored. The run was costly because Jim Wynn would homer in the ninth inning for the Dodgers and pull them within one. 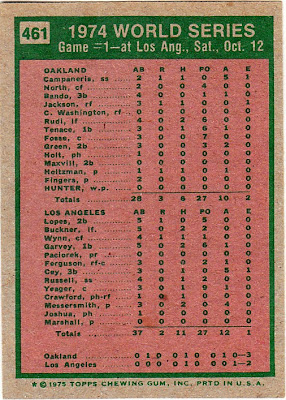 Back facts: Boy, do I love boxscores on the back of baseball cards. You can see that the Series started on a Saturday, which surprised me a little because as a kid I remember the Series always starting on a Tuesday.

A couple notables for me is that the Dodgers' starter, Messersmith, got two hits. Also, L.A. outhit Oakland 11-6. The Dodgers stranded 12 runners.

Other blog stuff: All the World Series cards in this set that I saw as a kid were minis. I had Game 1, Game 2 and Game 5 all in mini form.

Here is Game 1 in regular and mini form: 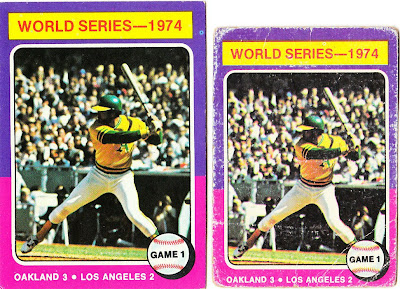 Great picture of Reggie. I definitely prefer it when Topps features one game per card. Those "composite score" things don't do much for me.

He defenitly looks like he's about to tee off on one.

For some reason, the '74 season ended on a Wednesday instead of a Sunday, so both the five game LCS and the WS started on Saturdays.

The box score on the back just adds to the greatness. Coupled with the nice pic on the front, it's a great all-around card. Except that score of course!

I hated Reggie for his baserunning antics in the 78 series. I eventually got over that and was able to appreciate him for the player he was and the rock star aura he cultivated.

Still hate the Yankees, though.