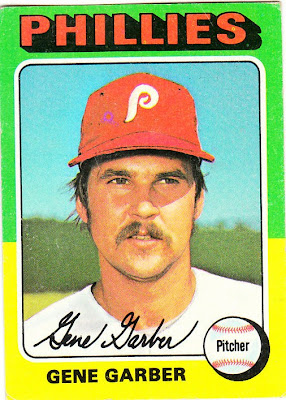 Card fact: This is the eighth and last card in a streak of eight straight cards that I have in mini form, many of which I pulled in 1975.

What I thought about this card then: I liked it. Gene Garber was a Phillie, he had a mustache. What's not to like?

What I think about this card now: Only because I'm aware that Garber was acquired by the Phillies in mid-season of 1974 did I figure out that Garber is airbrushed into a Phillies cap. It's a fairly good job. Garber was with the Royals until July of 1974.

Other stuff: Garber was the first sidearm pitcher I ever knew. He is mostly known for his role as a relief pitcher for the Braves from 1978 to 1987. He was a true bullpen guy, appearing in 931 games and starting just nine of them, including eight starts with the Royals in 1973.

Garber had most of his success with Atlanta. He saved 30 games for the Braves when they won the N.L. West in 1982. I have always admired him for stopping Pete Rose's 44-game hitting streak in 1978. I didn't like Rose, and when Garber struck out Rose on a change-up in his final at-bat, Rose whined that Garber "was pitching like it was the 7th game of the World Series" to which Garber replied "I had an idea that Pete was hitting like it was the last game of the World Series."

Garber ended his career back with the Royals in 1987 and 1988. He became a farmer after his career and is known for marketing "Emu Oil." He raises Emu as well as other poultry for eggs. 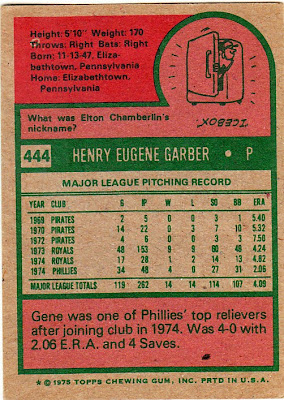 Back facts: Elton "Icebox" Chamberlin played from 1886-1896. Eat your heart out, William Perry, Chamberlin was the original "Refrigerator"!

Other blog stuff: Thanks to reader MJ, and later reading a report on the wire, I learned that Woodie Fryman (card #166) died on Friday. RIP, Woodie. 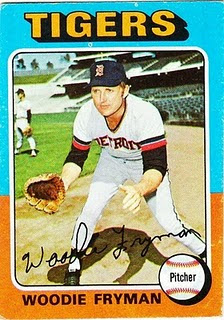 First, I got sweaty looking at that card. Just the look of him makes me think the card must be moist. Yuck.

I've never heard that story about Rose whining....so what, he expected a meatball? Crybaby.

Have you ever seen an Emu egg? Those things are huge and Emus are mean as hell.