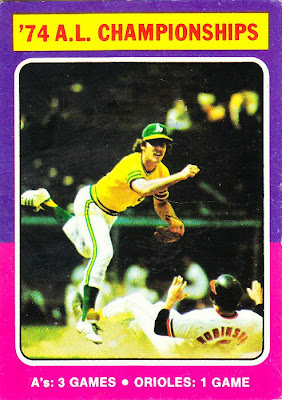 Card fact: This is the first card in an eight-card subset reviewing the 1974 postseason. It is a similar format to what was used by Topps from 1972-74, one card apiece for the respective league championships and then a card for each game of the World Series. In 1970 and 1971, Topps also devoted a card to each game of the league championship series.

In fact, designating a card for each game of the World Series was a Topps practice from 1967-75. Sadly, that practice would end with the 1976 set.

What I think about this card now: I cannot figure out which play this is during the A.L. Championship. That's obviously Brooks Robinson sliding into what appears to be second base. In all of the games of the series, Robinson rarely got on base (he either flew out, grounded out or hit a home run). I can find only one possibility, in Game 2, when Robinson reaches on a walk with two outs and then Earl Williams grounds out from second to first for the third out. But why would Dick Green be vaulting over Robinson as if he was turning a double play if it was a simple grounder to second for out No. 3?

I sure hope this a photo from the A.L. Championship. It'd be sad if it wasn't.

Other stuff: The A's won their third straight A.L. Championship in four games, but it wasn't all that easy. The A's lost Game 1 and Games 3 and 4 were nail-biters. NBC broadcast the series. The announcers were Curt Gowdy, Tony Kubek and Frank Robinson. 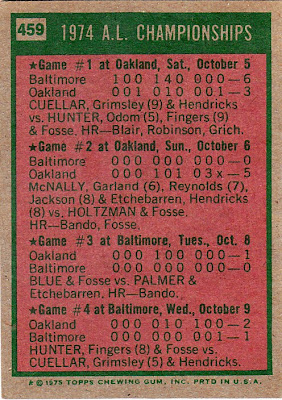 Back facts: You have to love linescores on the back of baseball cards. Game 3 looks like a hell of a game. Vida Blue threw a two-hitter, struck seven and walked none.

I'm as stumped as you are on the photo. One suggestion: in Game Three, Brooks reached on a one-out error by Dick Green in the fifth inning. Earl WIlliams and Andy Etchebarren each flew out afterward. Maybe Williams hit a grounder to third that went just foul, and Oakland turned two just to be sure?

Is that Dick Green or is that Ted Kubiak? I'm thinking this pic isn't from the playoffs and is from a regular season game. There is a play on April 28 in the 4th inning that would match this play if that is actually Kubiak. I think Topps cheated.

I thought of Kubiak, too, but the photo is too far off. I can't tell. Everyone on the A's had lots of hair.

I don't think the card is from the ALCS. Even though the crowds were far from sellouts at Memorial Stadium, there are only 3 spectators in the left field bleachers, which leads me to believe this is a regular season game.

None of the plays really fit and boo to Topps for being lazy. It's a good action shot, but shouldn't have been used.

Not that anyone will read this three years later but I am almost certain the A in that picture is Kubiak. I have this card signed by him in my set.